Could Chelsea's trophies made Archraf Hakimi prefer the club over Paris Saint Germain?

By Moneymase (self meida writer) | 8 days

Today 11th June marks the first match of Euros competition for 2020 as Italy will taking on Turkey tonight in Rome with final scheduled to be played in England 7th July. Many players are on their international duties as they were called for making up provisional squads, this becoming another top European competition that is going to bring together the European footballers against each other.

However, in the due process of organizing this competition ,its followed closely with summer transfers targeting many players across Europe and entire world. Clubs have been currently reported of making contacts to signing various players of their desires during this summer transfer window.

Chelsea becomes the top leading club in Europe in the race signing potential players to strengthen their squad when league resumes for next season. The club is now identified to be targeting young players between age eighteen and Twenty four years. This has been stimulated mainly by the club's eligibility to win this year's UEFA champions league trophy that has earned interests of young players joining the club this summer. 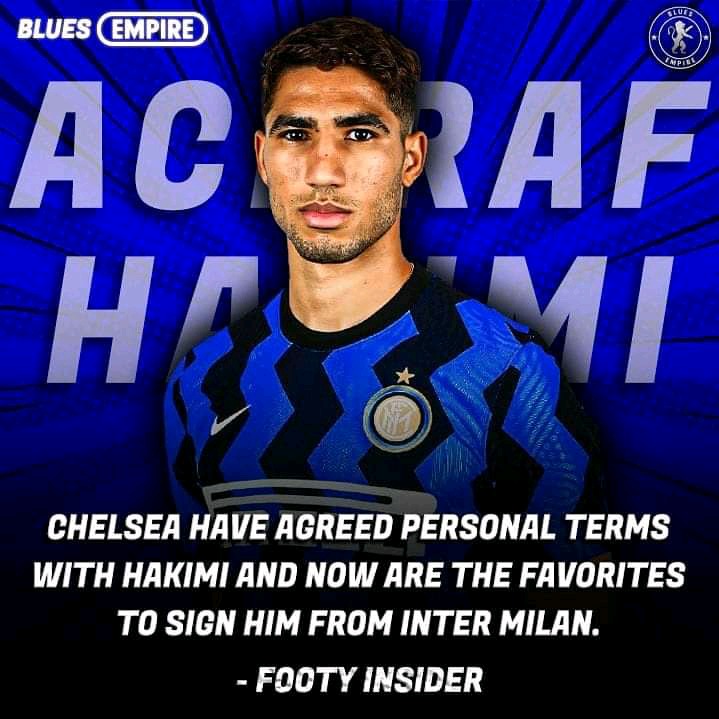 Currently reports have emerged about Chelsea being in contacts with Earlier Haaland and Hakimi Archraf to become the club's potential signing. Through sky sports news ,reports show that Hakimi have accepted Chelsea proposals of signing him and he tends to decline the PSG interests in him.

Hakimi is a professional footballer who plays as right back for Inter Milan in the Seria A side and his national team Morocco. Now is on the verge of becoming potential Chelsea player during this summer transfer period. He has currently ignored PSG interests and many football analysts and speciliats have suggested that Chelsea's trophies have changed the mind of the player. This is because Chelsea is club that is now evident to have taken everything in the European' competitions.

England Misses A Chance To Book A Place In Group D