By Marinart (self media writer) | 1 month ago 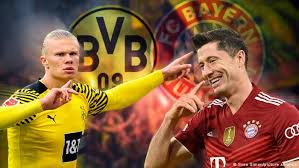 It is a super Saturday with top five european league clashes featuring their top clubs respectively. Germany's Borussia Dortmund and Bayern Munich face off in the long time derby. Only one point separates the two teams with Bayern on top of the bundesliga table with thirty two points.

The last six head to heads has seen Bayern secure comfortable wins against their rivals. Halland returned to action last weekend with a goal against wolfsburg after being substituted on. Bayern munich are the title favorites and have higher chances of winning the match.

Injury stricken Wolverhampton Wanderers face off a high scoring Liverpool side at the Molineux stadium. Liverpool hammered Everton four goals to one in the marseyside derby during the midweek. Raul Jimenez has scored three decisive goals for Wolverhampton securing them nine league points. Liverpool will win the match with over three goals.

Roma was beaten one goal to nill by Bologna while Inter secured a 2-0 victory over newly promoted Spezia during the midweek SA games. The last five head to head matches has produced an average of three goals per game.

First place Napoli drew with Sasuolo after a 2-0 win lead during the midweek SA game. Napoli face off a high scoring Atalanta side as pressure mounts on them after two draws. The match will produce more than three goals after the final whistle.

Content created and supplied by: Marinart (via Opera News )