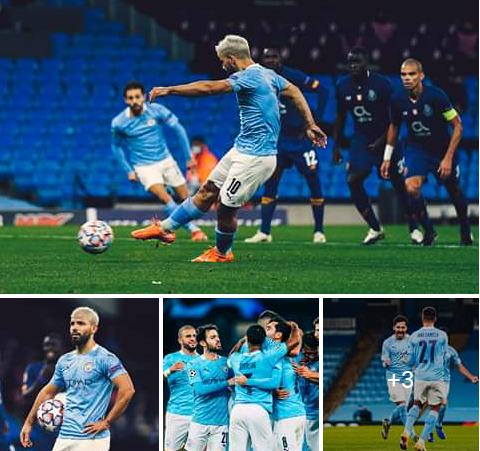 Manchester City capitalized on their Previous 1-0 win over Arsenal in Premier league to edge of Porto 3-1 at Etihad Stadium in their UEFA Champions League opener. Porto Opened scoring through Diaz in the 14th Minute before Sergio Aguero equalised for Manchester City 6 minutes later through a penalty kick to force a 1-1 draw at Halftime. The Cityzens came back into the second half rejuvenated where they had over 65% ball possession and 6 shots on target in which 2 converted into goals by Guendogan(65) and Ferran Torres(75) to bag in all the 3 points. Manchester City Manager Pep Guardiola adopted the 4-3-3 football formation naming Edersoon to start as a Goalkeeper covered by 4 defenders whom included: Walker, Dias, Garcia and Cancelo. The Midfield saw Bernando Silva, Rodri and Guendogan start as Aguero, Mahrez and Sterling (Captain) lead the attack. Manchester City played a dominating football, using central attack and aerial balls which paralizes Porto defence more so in Second Half. 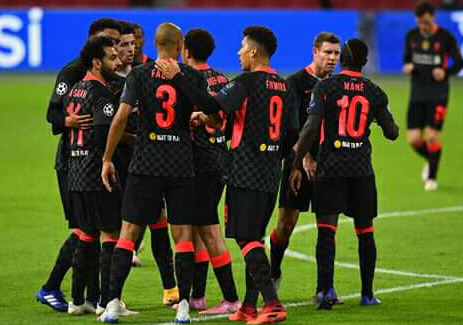 Liverpool Bounced back from their last weekend draw of 2-2 against Everton to crush Ajax 1-0 at Johan Cryuff Arena to book all their 3 points. Liverpool manager named a new 4-3-3 formation squad with Adrian starting as a goalkeeper. The Defenders included: Gomez, Robertson, Fabinho and Alexander Arnold while Midfielders were Milner, Wijnaldum and C Jones. Klopp chose his favourite trio Mane, Salah and Firmino as his Forwards whereby Mane deflected a goal which was turned in by Tagliafico as a Own goal. Both teams had 5 shots on target as Ajax dominated the ball possession with 53% and won 9 corners against Liverpool's 3. Goalkeeper Adrian made 5 vital saves to keep Liverpool alive on the match with Ajax making 8 Counter Attacks but Liverpool narrowly won 1-0 to bag in all the 3 points. Jurgen Klopp adopted the defending football technique majorly using Ajax weak right wing to their advantage; exploring Tagliafico weaknesses whom gifted them a goal and free space to make 3 shots on target. 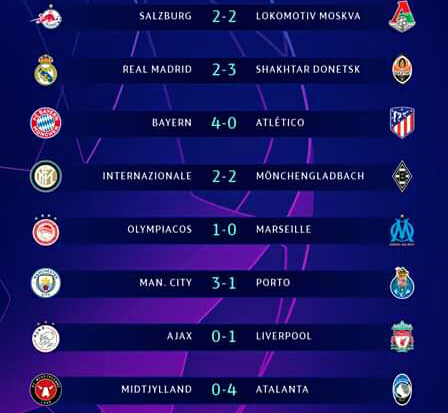 Defending Champions Bayern Munich were on action against Atletico Madrid at Allianz Arena where they humiliated them 4-0 in which Kingsley Koman scored an hatrick. Over 10 times Champions Real Madrid continued with their Misery after loosing 1-0 to Cadiz; Shakhter Deonestk did not give a break as they 3 quick first half goals to secure a 3-2 Win at Bernabeu as Zinadine Zidane Job at Los Blancos becomes Uncertain. Bayern Munich is leading their group followed by RB Salzburg and Lokomotiv Moscow who drew 2-2 yesterday with Shakhter Donestk leading their group also with 3 points after Romelu Lukaku scored twice to salvage a 2-2 draw against Borrussia Monchengladbach. Atlanta leads their group after edging off Midjtylland 4-0 Away followed by Liverpool who narrowly won against Ajax 1-0 while Manchester City is on top of their group after humiliating Portuguese Champions and 2004 UEFA Champions League title winners 3-1 at Etihad as Olympiacos eased past Marsaile 1-0 at home.