By Annnjeri (self media writer) | 18 days ago

Two Kenyan Athletes on Sunday, September 26 hit the headlines after they won a marathon they were participating in but were denied cash for following a volunteer guide who led them off their marked track.

The marathon which was held in the United States of America could have seen them pocket Ksh 331,200 as an award but had been denied the bonus for the blunder they committed but in a fresh turn of events, Elijah Mwangangi Saolo and Christopher Kipyegon can now smile to the bank. 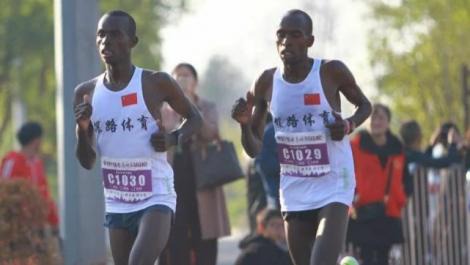 This is after the directors of the event called them and offered to compensate the two Athletes Ksh 221,000 each and this could be a knee-jerking move since Elijah was participating in the event to raise funds to support his family in the US.

Losing the initial cash prize had proven to be a blessing in disguise for Elijah as he had launched an online fund drive which had also helped Mwangangi raise Ksh 613,717 that surpassed his target.

Elijah has now revealed he plans to assess the toll on his body in the coming days before he makes a decision on whether he is fit enough to participate in another race before his tourist visa expires.

What Ruto Said In Kikuyu Language In Front Of Uhuru, Raila As Excited Crowd Shouts With Joy

Men Who Records Women While Having Sex Leaves Akothe Angry

(Video) What Uhuru's Bodyguard Did After Journalists Blocked Uhuru's Way

Mother Demands Answers From Raila On The Disappearance of Her Son

President Uhuru Kenyatta Shares Bad News To Judiciary, Says They Will Not Stop Him From Doing This