By Jepkoech (self media writer) | 6 months ago 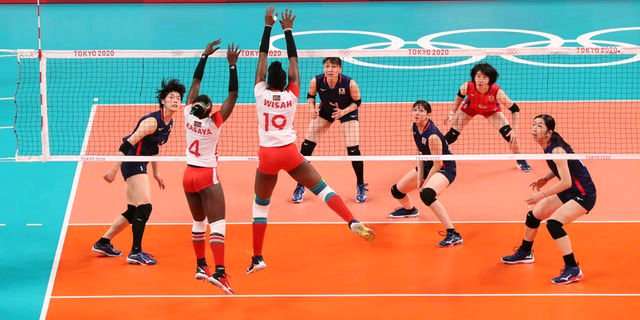 Part of the action between Kenya and Japan during the women's preliminary round pool A volleyball match at the Tokyo 2020 Olympic Games at Ariake Arena in Tokyo on July 25, 2021.

Malkia Strikers next face South Korea on Tuesday (9.45pm, or 3.45pm, Kenyan time) before taking on Serbia on Thursday and Dominican Republic on Saturday.

Mamasan Spikers is the somewhat derisive term Japanese locals used to refer to Kenya’s national women’s volleyball team when it first made a foray onto the international stage in the early 90s.

Their oversight playing shorts and generally baggy outfits seemed to fan the flames of such ridicule, if their performance on the court didn’t justify the condescending reference.

Then, Japan had mega stars such as Obayashi Motoko, Asako Tajimi, and others, with Kenya unable to offer any meaningful resistance.

In fact, Japan head coach Nakada Kumi, who as a player led Japan to an Olympic bronze medal at the 1984 Los Angeles Olympics, was full of praise for Kenya after the Malkia Strikers almost nicked the final set.

“Since we last played against Kenya some years ago, I see a lot of improvement in the team,” Kumi said.

Cabinet Secretary Ministry of Sports Heritage and Culture, Dr. Amina Mohamed (fourth right) together with the Kenya delegation react during the women's preliminary round pool A volleyball match between Japan and Kenya during the Tokyo 2020 Olympic Games at Ariake Arena in Tokyo on July 25, 2021.

“Previously, Kenya relied on individual stars, but now, there’s a semblance of teamwork which almost led to them beating us in the third set,” the coach said after the match that lasted one hour and 19 minutes.

It was seesaw affair in the opening set with Kenya shocking the hosts by racing to 6-3 ahead with Sharon Chepchumba and Leonida Kasaya bagging the early points before the hosts tied at 6-6 and never looked back to take the first set 25-15.

The injury of Japan’s outside hitter Sarina Koga seemed to have weakened the hosts who, however, cruised to a 25-11 win in the 23-minute second set.

Koga was stretchered off with a suspected fracture after a bad fall, with Kumi saying she was yet to receive the medical report.

The night’s top scorer Sharon Chepchumba was brilliant, chalking up a game-high 18 points.

But Malkia Strikers saved the best for last, stretching the game almost beyond the hosts reach only to disintegrate and let the 31-minute third set slip away, 23-25.

There were a lot of positives to be drawn from the match with coach Paul Bitok, who sat on a panel that featured six Brazilian tacticians, happy with improvements in service reception.

“First I’d like to say sorry for not winning today,” Bitok apologised to Malkia Strikers’ legion of fans.

“We had a very good chance… When we started the match, I foresaw a good result. A surprise victory.

“But in the middle of the first set we lost focus and the players started concentrating more on Japan’s game. We forgot how we were supposed to play.

“But when it reached the third set, then I came in and told the players to forget about Japan and enjoy, play our own game.”

That’s what inspired the flying finish.

Team captain Mercy Moim was also inspired by the game.

“It was a good game compared to how we have been playing against Japan previously,” Moin observed.

“We haven’t played a competitive match in almost two years. That’s why we took time to get familiar with the court before coming up forcefully in the final set.

“In the next matches that we play, we will show great improvement," said Moim who is also happy with the team’s blend of youth and experience.