By Simon (self media writer) | 4 months ago

When Eugene Opuodho took a picture while wearing worn-out soccer boots, he didn’t know that would mark him a new point neither did he expect anyone to react to it positively but fortune was creeping in unknowingly.

The 20-year old talented footballer who plays for Nyalenda FC received luck when former Kenyan football star Boniface Ambani spotted him and decided to give a helping hand after the photo he posted on his Facebook account.

Ambani, in his social media post, said that he didn’t mean bad when posting as he didn’t even know it was for an aspiring footballer in the country.

“I pranked guys using this picture, little did I know it belonged to one of the aspiring soccer players in the country. At times look at my posts positively, Who knows...” wrote Ambani.

Ambani said he was messaged by someone who told him that he knew the person in the photo and could help reach him. He then reached out to Amos Ochieng, a soccer trainer at Moi Stadium in Kisumu who located Eugene and handed over new boots to the young talented player.

Opuodho who was surprised, couldn’t hide his joy as he sent his appreciation to the renowned football star for his act of kindness.

“I’m quite grateful and humbled by your act of kindness and the human heart. You have motivated me to continue with my talent. All I can offer is a huge thank you and continuing to be dedicated to my sport,” acknowledged Opuodho.

He stated that being that his two elder brothers were good at soccer, which contributed greatly and really made it easier for him to realize his talent.

“Realizing my talent was the easiest thing. When I was still a kid, my brothers played football and I always followed them to the field and eventually began playing with them,” stated Opuodho.

He adds that his parents were not a hindrance to him at any point and the two elder siblings also paved way for him to rise in the sport.

The talented footballer notes that there have been many challenges but his dedication and strong support from friends has always given him the strength to forger on.

“There are many challenges like for now we are at the National Division 2 League and there is no recognition. Funding is a major setback for us as a team since this is a community team, there is no pay. It is us the players who contribute to enable us to honor matches,” disclosed Opuodho. 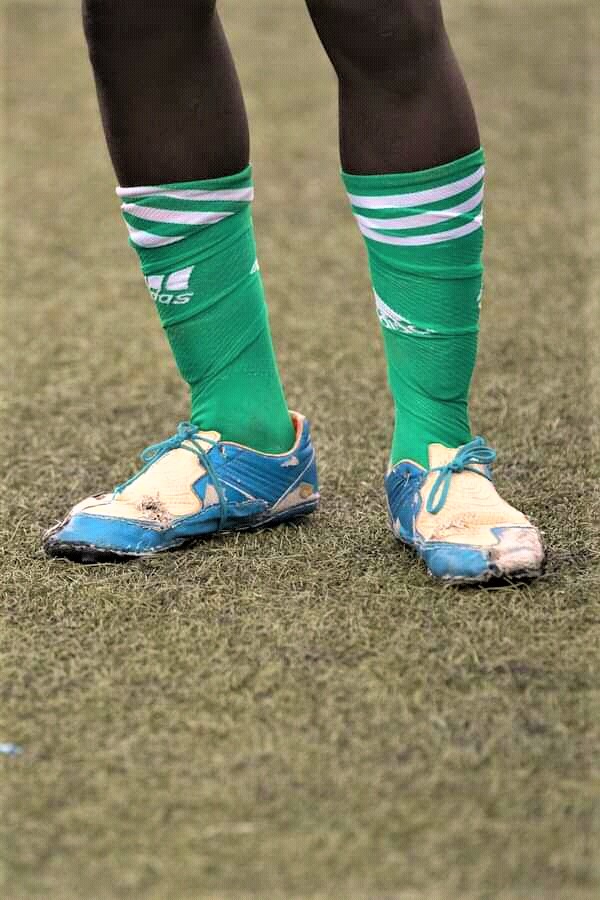 A photo of Eugine Opuodho's shabby football boots that he posted on his Facebook account. The retired football star, Boniface Ambani later identified him and sent him a new pair of boots.

He further adds that having received the boots before his next game really motivated him and he felt to reward the former star and his team by ensuring they won their next match against Magena United.

“I received the surprise gift before our game with Magena United and I would say that gave me the push to score goals,” revealed Opuodho.

The Kisumu promising footballer from Nyalenda however urged the government, well-wishers, and other stakeholders to come out and support grassroots talents in the localities.

“Kenya is rich in talented youths, those who can, and our able government should just get the willing heart to support us and we will make our country proud.

The former football star who now owns merchandise, said he didn’t know the post was of a Kenyan but immediately he realized otherwise, he reached out for help.

“I actually never thought they were for someone in Kenya. When I got the proof, I felt he needed help. I then got him boots and asked for a friend to deliver,” divulged Ambani.

He appreciated the reward Opuodho gave him and the team by scoring a brace during their match against Magena United.

“Mine is to urge people to do what they can in their respective capacities. It will go a long way in helping somebody somewhere. I don’t know Eugene, neither have we met. All that touched me is he going to an extent of repairing his boots daily just have them help him play,” averred the retired player. 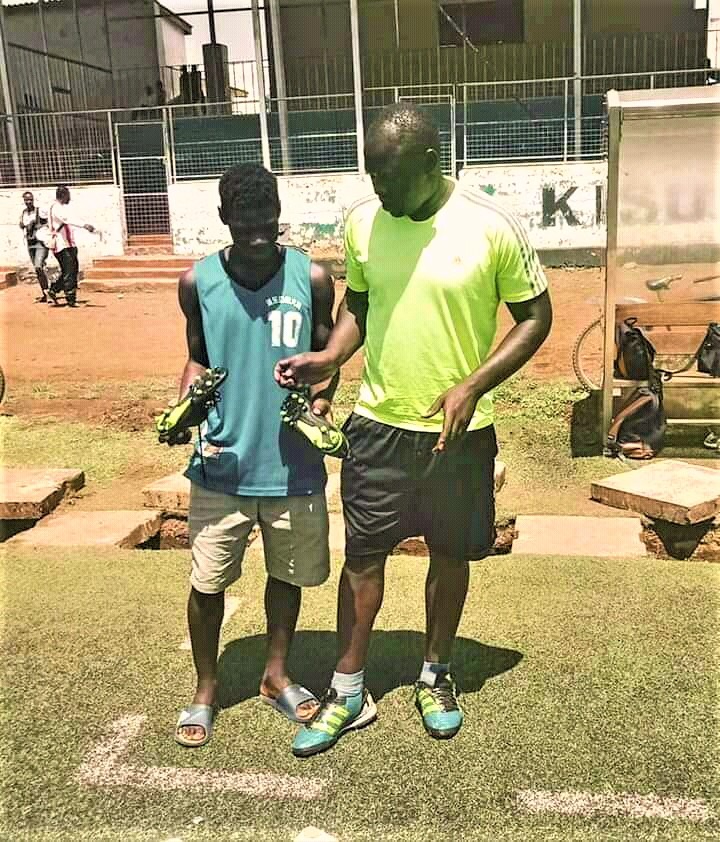