Manchester United drew with the league leaders,Chelsea with the game ending 1-1. The goals were scored by Sancho for United and Jorginho for Chelsea( scored through a penalty). The game was in the favour for Chelsea to win all three points due to their recent form compared to Manchester United who have only 18 points in 13 league games this season. But unexpectedly, things didn't work on their side. 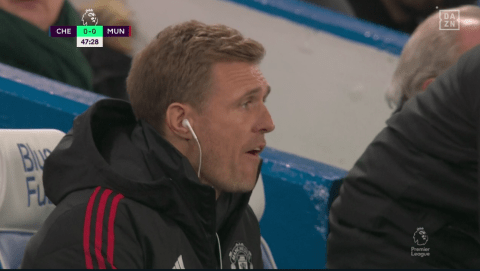 However ,something new happened as man United fans spotted Darren Fletcher speaking with someone through his earphones. This shoked many united fans, Manchester United fans and even during the day pundits believes that Ralf Rangnick masterminded the side’s 1-1 against Chelsea by directing Darren Fletcher throughout the match on what to do.

Michael Carrick has been in temporary charge since Ole Gunnar Solskjaer’s was sacked last week but Fletcher who is currently United’s technical director has been on the bench to assist Carrick for both matches after Ole GunnarSolskjaer was dismissed last week.

Carrick spent the majority of the match in Stamford Bridge on the touchline but Fletcher was seen speaking into an earpiece on the bench with unknown person who is believed to be the incoming Manchester United interim manager, Ralf Ragnick.

Furthermore, All Manchester United coaching staff were all on the bench ,this leaves us with a questions over who Fletcher could have been speaking to and what was the main agenda behind him talking through earphones during the match than it was before.

Rangnick is set to be appointed interim manager this week and supporters believe the German was conducting the side’s tactics by guiding and directing Darren Fletcher, who was vocal throughout, the game.