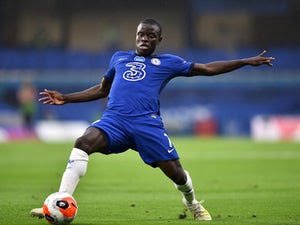 Chelsea suffered a first half injury blow on Tuesday night as they faced Leicester City in a very important match that had a bearing in securing a Champions League slot for next season. In the match played at Stamford Bridge, pivotal midfielder N’Golo Kante was forced to walk off the pitch after suffering an injury.

It was not clearly established the nature of the injury but the 30-year-old Frenchman had had hamstring injury in the recent months.

Chelsea captain Cesar Azpilicueta and manager Thomas Tuchel consoled him as he trudged off the pitch in the 32nd minute. He was replaced by Mateo Kovacic.

Kante has been a sensational player for the Blues this season, winning a man of the match award in the win over Real Madrid in UCL semifinals.

After the match that Chelsea won 2-1 to topple Leicester City from the 3rd position, Blues manager Thomas Tuchel was optimistic that all was well for the Frenchman as well as Kai Havertz who is out on injury. He also expressed hope that the pair will be available for end of the season game against Aston Villa on Sunday.

“I don’t know yet,” Tuchel said. “We will check them tomorrow. I have a good feeling with NG (Kante) he said he felt something but didn’t want to risk a muscle injury so I hope for Sunday. With Kai it is the same.”

Chelsea are chasing for a place in the UEFA Champions League next season with two options on card. The first one will be determined on Sunday when they face Aston Villa in a must win scenario even though it will also depend on how Leicester City play out against Tottenham Hotspur and Liverpool against Burnley and Crystal Palace.

The second and most crucial one is in the UEFA Champions League final against Manchester City at Estadio Do Dragao on Saturday 29th, May. A win will be their second in the competition's history, direct qualification to next season and huge prizes.

For Chelsea fans, the prayer is that their star central midfielder be fit to play in the final. In his absence, Jorginho and Kovacic are likely start, while Billy Gilmour is the next man up.