Opinion: Why Manchester city has upper hand of winning the champions league final.

By asigocharles (self meida writer) | 23 days

Why Manchester city might win this season's champions league final against their bitter rival Chelsea. 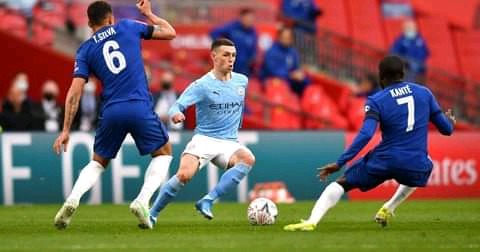 This season's champions league final is scheduled to be played at Porto Portugal after the venue was changed from Istanbul, where it was previously scheduled to take place .

Manchester city and Chelsea progressed smoothly to the final after knocking out European giants PSG and Real Madrid respectively.

The 29th May final is a mouth-watering one to watch between the two English sides considering the current form of the two teams in the league.

However, Man City might emerge the champions of Europe for the first time in the club history because of the following points.

Man City's Head coach Pep is known for his experience in the champions league final as compared to Tuchel of Chelsea.

Man City boss has worn the trophy many times with Barcelona and Bayern Munich .This makes him have more experience on how to play finals in the competition as compared to Tuchel who has only played the final once with PSG and ended losing 1-0 to Bayern.

Chelsea's lack of a striker.

We have seen Chelsea missing lots of goal opportunities this season as their main striker Timo Werner continues to miss goals .

Tammy Abraham and Giroud have not been trusted by Tuchel infront of the goal leaving Kai Haverts to play as false nine in most of the games.

Man City have got in form strikers ; Gabriel Jesus, Maharez , Sterling and Foden who are all goal hunters and will trouble Chelsea defense.

Pep will not accept the third defeat by Tuchel.

Gardiola will not accept to be beaten again by Tuchel. Chelsea knocked Man City out of FA before beating them 2-1 at the Premier League.

Gardiola will try all tactics possible to beat Tuchel on 29th May at Porto to win champions League for Man City for the first time.

Do you think Chelsea may to win against fearless man city after these facts ? Comment if you have any opinion.

Content created and supplied by: asigocharles (via Opera News )