By MarshMedia (self media writer) | 5 months ago

3-0, Chelsea wins against Crystal Palace in today's game at Stanford bridge stadium premier league round 1. This gives a green light to the Champions League winners 2020 and the holders of the super cup 2021.

Its highly likely to win the English Premier league 2021 as the league goes on. Pulisic, Trevoh and Alonso scoring the three goals for the match. 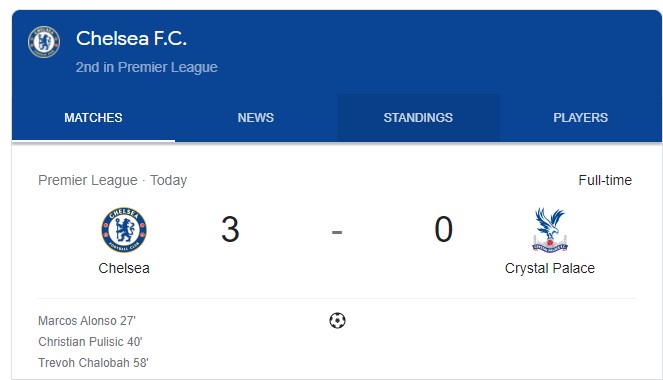 Marcos Alonso Mendoza who is a Spanish professional footballer who plays as a left back or wing back for Premier League club Chelsea and the Spain national team. The man scored the first goal at 27 minutes of the game giving an early lead for Chelsea.

Christian Mate Pulisic who is an American professional soccer player who plays as a winger or an attacking midfielder for Premier League club Chelsea and the United States national team. He gave Chelsea the hope of winning the match by scoring at 40 minutes of the match also leading to an early lead for Chelsea as Crystal palace took a 0 in the first half making it 2-0 Ht.

Trevoh Tom Chalobah who is an English professional footballer who can play as either a centre-back or defensive midfielder for Premier League club Chelsea, scored the third goal for Chelsea giving the club a lead of 3-0 against Crystal palace at 58 minutes.

As the league goes on it will be hard to understand the winning team, some the games in the list Likes of Arsenal which lost 2-0 to Brenteford. Arsenal are holding into number 18 as per today's games. This shows no good start for team Arsenal, Hopefully they will gain to the top as the game goes on.

Let us wait and see how the game goes, for tomorrow the 2020 tittle holders Manchester city will be defending their tittle as they crush with Tottenham for their first game in the premier league 2021. Will it be the defending Champions of 2020 premier league cup or the club that is willing and ready for everything to win the tittle vs the 2020 Europa champions league winners Chelsea Fc.

Content created and supplied by: MarshMedia (via Opera News )