By @fabrizioromano (self media writer) | 7 months ago

Chelsea know they have plenty of work to do in the transfer window to deliver what thomas tuchel has asked for following the successful takeover of the club by Todd Boehly.Chelsea manager Thomas Tuchel has spoken to Barcelona attacker Ousmane Dembele and has explained his plans for next season to the frenchman and its a matter of time for the frenchman to complete. Dembele will sign for Chelsea this summer after he rejected a contract offer from Barcelona and will be tipped to leave the club on a free transfer as several clubs interested in the Barcelona winger, Chelsea will be tempted to sign the attacking winger to strengthen their front-line. Dembele will properly sign for chelsea as his preferred choice because of Thomas tuchel former boss at Borussia Dortmund thus uniting with the coach at chelsea

The 25 year-old moved to Barcelona in August 2017 for a deal worth £130 million however he has been hampered by injury which has affected his playing time and progress at the Spanish giants,thus despite the injury the player has registered 13 assist in 2021/22 season hence being named the laliga playmaker. 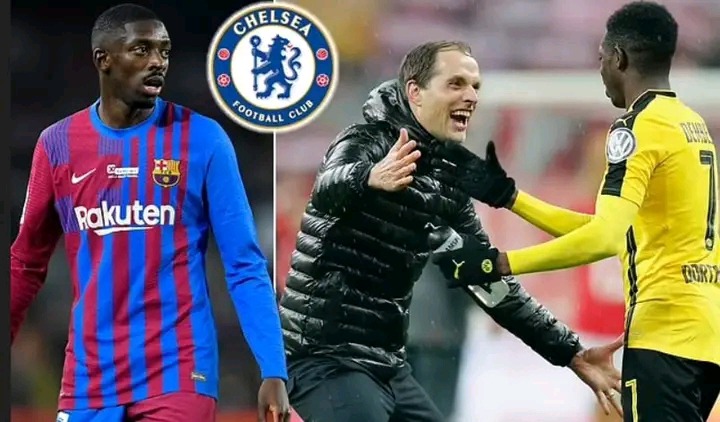 Chelsea agreed terms with France defender Kounde back in January and were hoping to conclude his transfer quickly this summer but Sevilla have still not received an official bid for Chelsea's number one priority signing, its sayed that £51.5m is the starting point for negotiations but Sevilla hope Kounde's value could rise as he features for his country in the Nations League and that other premiere league teams are interested in the Frenchman, and on the other hand konde the Sevilla defender is forcing a move away from sevilla to join a more competitive and top club in order to gain more experience and learn from experienced player's i.e the likes of thiago silver.

The Frenchman was affected last summer at the start of the season by the almost done deal that almost went through but failed thus wouldn't like a fail through again this summer. It would be advantageous to chelsea to sign him to play alongside his frenchmen i.e the likes of kante and nkunku if he joins from Germany 🇩🇪 side Leipzig thus making chelsea full of frenchmen in their team.

Content created and supplied by: @fabrizioromano (via Opera News )