Manchester City need to get their Champions League bid back on track after a disappointing defeat at Paris Saint-Germain last time out and they will fancy their chances of taking all three points at Club Brugge.

Brugge have made a solid start to their own European campaign with four points from two games and they currently sit one point ahead of City in second spot in the Group A table.

City will again be without forward Ferran Torres for Tuesday’s game as he faces around three months on the sidelines with a fractured foot. The hosts have a few injury issues with defender Matej Mitrovic sidelined and summer loan signing Ruben Providence still waiting for his debut as he continues to recover from an ankle issue.

The hosts have won five matches,lost two matches with one draw in the process.The goal difference is 25-21 with the visitors being disadvantaged.

The hosts have won four matches,lost four matches with three matches concluding in draws.The goal difference is 21-12 with the visitors having an advantage. 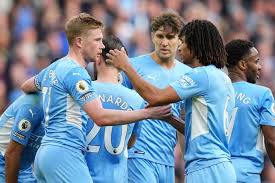