Harry Maguire instructed to give up captaincy inside Man Utd And Hand Over To Christiano Ronaldo.

Inside Manchester United, Harry Maguire is being urged to relinquish his captaincy. 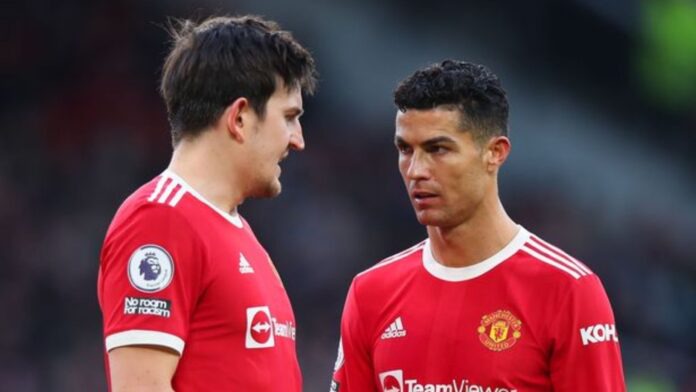 According to the Mirror, interim manager Ralph Rangnick, Cristiano Ronaldo, and Maguire have discussed the latter relinquishing the armband for the rest of the season to relieve pressure on him as he deals with his own lack of form.

But Maguire is hesitant to do so for fear of permanently losing the captaincy.

Interim manager Ralf Rangnick has asked Ronaldo to mentor the young players in the squad, which is said to have irritated Maguire even more.

United captain Maguire is said to be feeling increasingly undermined by the 37-year-old superstar’s enormous influence in the dressing room, particularly among the younger players.

Ronaldo has positioned himself as the role model for younger players, emphasizing the importance of one figure – himself – in getting everyone pulling in the same direction.

Maguire is said to be feeling marginalized in terms of authority within the United dressing room, which has led him to believe that some of the players are losing respect for him.

There is a growing belief within the Old Trafford dressing room that Ronaldo will take over as captain from Maguire, who has been out of form.

Rangnick’s decision to enlist Ronaldo’s assistance in guiding United’s younger players, including Jadon Sancho, Scott McTominay, and Marcus Rashford, has been interpreted as a direct challenge to Maguire’s position as captain.

Some of United’s younger players are said to be conflicted about the situation, believing they should remain loyal to Maguire as captain despite Ronaldo’s massive presence and influence in the dressing room.