Chelsea: Tuchel Prioritizes Auba- Where Sterling Could Play if Transfer is Sealed

Spanish giants Barcelona are arguably the busiest club in this summer’s transfer window going by how many transactions they have completed so far, and how many they will potentially close in the next few days. Xavi Hernandez has been very demanding since taking over the managerial job and luckily for him, the board has been open to all of his suggestions and the players he wants to recruit. He has already completed top signings this summer such as Robert Lewandowski, Franck Kessie, Andreas Christensen and so on. The problem however is that certain players who were already in the squad feel like their position in the club is threatened, and that includes former Arsenal striker Pierre Emerick Aubameyang. The arrival of Robert Lewandowski has been welcomed by many and true to many’s prediction, the Polish striker has dislodged Aubameyang from the first eleven. Xavi’s plan was to have two reliable center forwards, Lewandowski and Aubameyang, but unfortunately for the Spaniard tactician, he can’t play them both at the same time yet they all want to start matches. 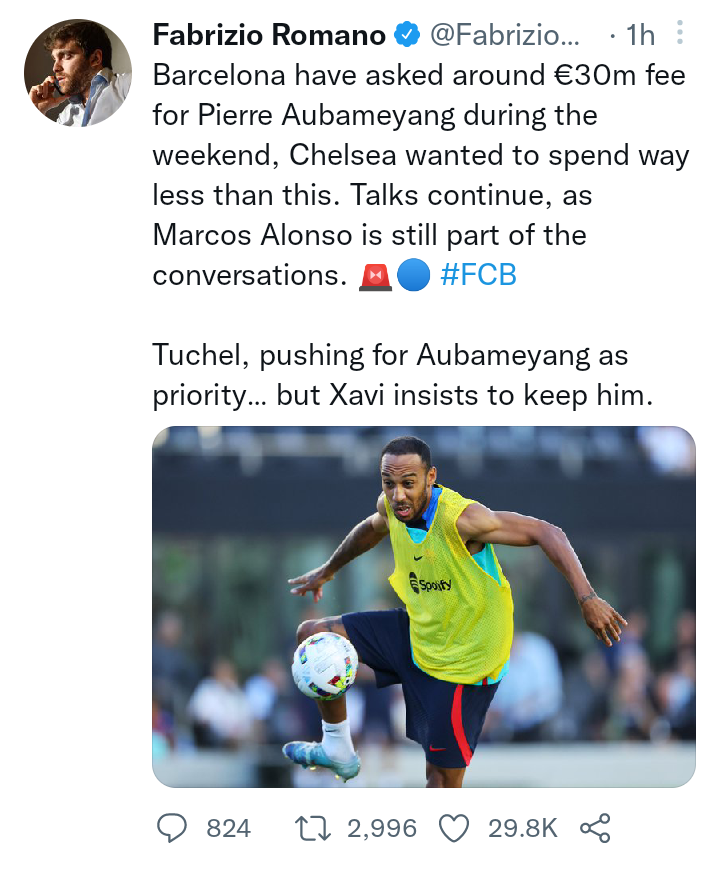 Chelsea have noticed this dilemma and have opened talks with the Catalans to sign Aubameyang. Thomas Tuchel had a prolific experience with the striker at BVB and would really like to have a repeat of that at Chelsea. €30 Million is Aubameyang’s set price tag, but Chelsea want to sign the 32 year old for much less which has brought the deal at an impasse. Thomas Tuchel recently had this to say about Aubameyang before a formal bid was tabled. “I really like Aubameyang and I believe he can do exceptionally well in any team he joins. It goes without saying that he is one of the best players in the World and any club would want to have him. I cannot disclose our current plans with him, but we will see what will unfold in the future.”

Signing Aubameyang would mean that Raheem Sterling would have to be shifted to his more natural position at LW. The England international struggled a lot in the #9 positions against Spurs and consequently failed to score but was lucky enough to provide an assist. Playing him in his natural position would make him more efficient and increase his productivity on the pitch.