Star Set To Fly To London Tommorow Ahead Of Medical

By EASPORTS (self media writer) | 10 months ago

Arsenal have not confirmed any deal yet regardless of many rumours linking them to a number of players. The club want to strengthen the squad ahead of next season which starts later next month. The gunners under Mikel Arteta will have a new look as many players will be released.

According to football.london Arsenal have hijacked a deal for Takehiro who had agreed personal terms with Tottenham Hotspur. The Bologna defender will be replacing Hector Bellarin who is set to join one of La Liga club later this month.Bologna defender Takehiro Tomiyasu will be traveling later this week to have his medical test in London [ Di Marzio ]. 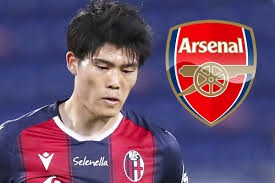 The gunners have to be serious enough to compete for trophies and champions league spot next season or else Arteta will be sacked.The 22-year-old would cost around €17m plus add-ons, according to The Athletic’s report, so the move isn’t a ridiculously large investment either.

Arsenal's technical director Edu has confirmed that the club will be announcing some three transfer deals in the coming weeks. It's now believed that the three include Takehiro, Albert Sambi and Ben White. These are the players that the north London club is interested in and advanced negotiations with.