By Campus_News (self media writer) | 1 year ago 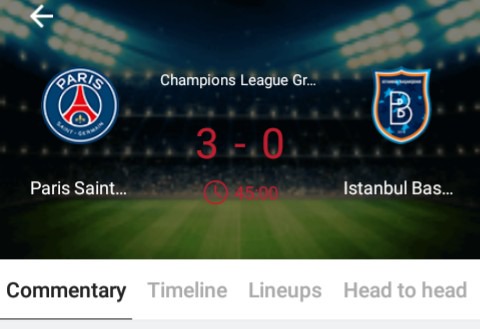 Paris st. German are in action with Instabul after their match was yesterday postponed due to racism claims. The match was stopped yesterday at the 30th minute as players from both sides walked away from the field following Demba BA's claim that the forth official called him "black man".

Manchester United's hope was in Instanbul's hands that at any chance they could beat PSG 2:0 then they were to proceed to the last 16 following their goal difference.

PSG's first half 3:0 win has officially sinker Manchester United hopes and now are all prepared to play Thursday football in the UEFA Europa League this season. Manchester United was the only EPL team knocked out from the group stages. All other Premier league representatives which include Chelsea, Liverpool and Manchester City proceeded to the last 16 after finishing top in the various tables.

Arsenal now feels happy to welcome their all time rivals in the challenge. They're on top of the table of their group stage.

Content created and supplied by: Campus_News (via Opera News )