Transfer Breaking News:United are in broad agreement in to sign A Serie A Defensive midfielder 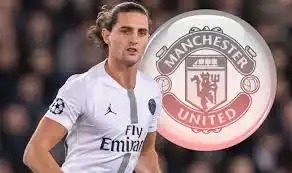 In general, Manchester United and Juventus have agreed in principle to bring Adrien Rabiot to Manchester.

Following up on a previous report by David Ornstein, Sky Sports News described the agreement as thus, using the same language to describe the agreement United has in place for Frenkie de Jong since last month.

But earlier today, the Athletic journalist provided another piece of information that will encourage supporters who are skeptical of the club's business practices.

According to a comment from Ornstein on The Athletic Football Podcast provided by UtdDistrict:

“I suspect, from the sort of noises I’ve got around the Adrien Rabiot situation, that #mufc might look to do this deal additionally to whatever might happen or not with Frenkie de Jong.”

Given that Rabiot loves to dribble in midfield and has a high frequency of link-ups, his style of play is comparable to Frenkie de Jong's, therefore it would have been reasonable to expect that his acquisition might be viewed as an alternative to Erik ten Hag's top target.

In fact, for Maurizio Sarri, he played in a position like the "connector" role Fred has been filling in the lack of a more suitable substitute during what was perhaps his best season in a Juventus jersey.

Rabiot and Miralem Pjanic frequently rotated tasks on the field under Sarri, helping the defensive line to develop play from the back.

Therefore, it would appear that, should both moves go through, Rabiot and De Jong might play midfield for Manchester United in a similar way.

If both players join the Red Devils in addition to Christian Eriksen, it would be impossible to claim that the midfield choices from the previous season were not improved.

The setback against Brighton and Hove Albion on the first day of the season has slightly dampened the mood, especially in light of United's failure to turn their possessions into dangerous attacks.

Both Fred and Scott McTominay frequently gave up possession in risky positions as Ten Hag's team struggled to handle Brighton's pressure higher up the pitch.

Rabiot may have some unusual baggage, but compared to the other technically gifted midfielders, he at least has more to offer when the ball is in his hands.

Update: Supreme Court To Give Full Presidential Judgement On Monday