By Jacksmall.com (self media writer) | 9 days ago 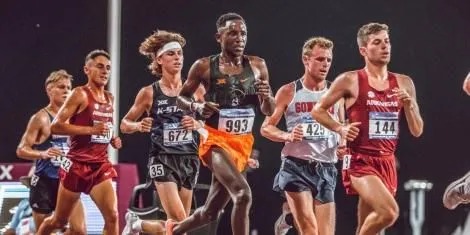 Kenyan athlete Victor Shitsama's journey embodies the phrase: The journey of a thousand miles starts with a single step.

After finishing high school, the athlete travelled from Western Kenya to Iten, Elgeyo Marakwet County in order to pursue his dreams of becoming a professional athlete.

Speaking to international media outlets, he noted that he had no idea if he would make it out of Western Kenya, where he grew up. Relentless in his pursuit, Shitsama resorted to take a chance and move to his uncle's home in Iten in order to start training to become a professional athlete.

Once he began training, he developed a goal of trying to get recruited to run in the United States of America.

"When I finished my high school, I moved right away to Iten to start my official training. In 2016, Oklahoma State University (OSU) had a coach, Bobby Lockhart, who came to Kenya bringing the under 20 athletes to a championship in Nairobi," he stated.

After a series of training, Lockhart spotted Shitsama's talent and affirmed to walk with him in his journey.

"He saw me and informed me that I had a skill in running. He offered me the deal of a lifetime- a chance to get enrolled at OSU if I would run at a certain time- which I did. So, that was the biggest thing that motivated me, I put all of my funds into training hard," he stated.

True to his words, the American coach helped Shitsama move to Stillwater, Oklahoma State in 2018.

During his first indoor season with the University, he earned all 12 Honours and was named the Big 12 Cross Country Newcomer of the Year while also setting a new personal best record.

"Finishing third last year is the motivation for us to work harder so that we can win this year. Also, everyone on the team from my teammates to my coaches, everyone is hungry and feels like we need that championship win," he stated.

Shitsama noted that he acknowledged the vital role Lockhart played in his life- from Western Kenya to achieving his dream.

"For this year, my biggest goal is for us to win the NCAA Cross Country National Championship," he shared.

Jurgen Klopp Prophecy About Liverpool that Could Come True this Season

Is The Presidential Race Between Ruto And Raila Or Mudavadi And Kalonzo Still Have A Chance?

7 Things to Avoid Doing If You Want to Be Richer