Five FKF Premier League matches were played over the weekend, After a goaless draw against Sofapaka on 19th January, Kariobangi Sharks secured a vast victory of 3-0 against Batoto ba Mungu at Kasarani Annex stadium. The victory prolled them to the 28 points after playing 16 games.

AFC Leopards secured their second victory in a roll after registering a 2-1 victory over Mathare United. The 'Ingwe' are sitting on 11 position on 20 points after 16 games. Mathare United hs lost all his last five league matches leaving them in relegation zone with seven points. 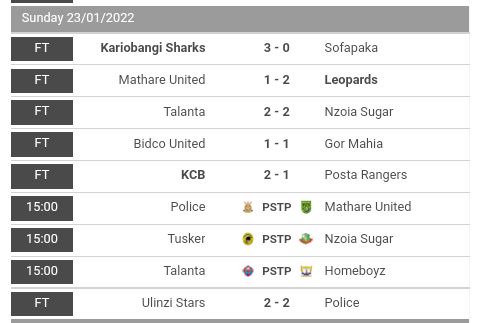 At Ruaraka stadium in Nairobi, the newbies Talanta FC shared points with Nzoia Sugar after a 2-2 draw. The draw left Talanta in seventh place on 24 points while Nzoia Sugar 16th on 10 points.

Gor were held to VA 1-1 draw against Bidco United at Thika stadium. Bidco United and K'Ogalo had registered the same scoreline four days ago, and on Sunday, they needed a goal each from Stephen Waruru and Samuel Onyango to share the points again. 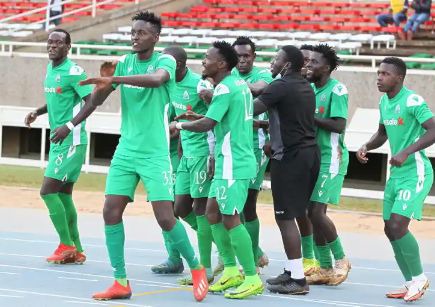 Waruru scored from the penalty spot when Bidco United were awarded a penalty in the 40th minute. Three minutes before the break, the visitors were given a penalty of their own and Onyango successfully converted to level the score at 1-1. 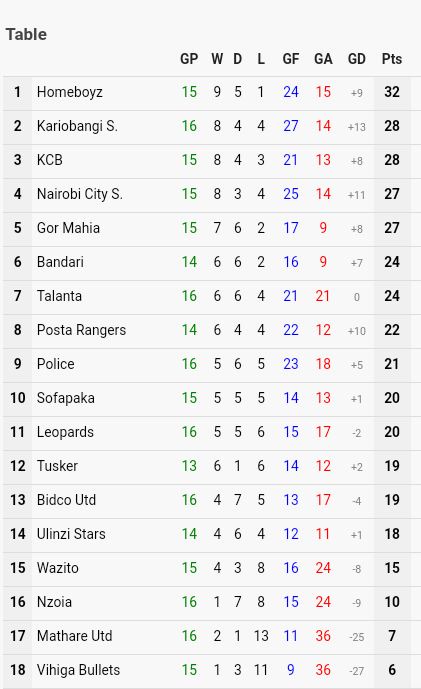