Zaha refuses to take a knee before kick-off, becoming the first Premier League player to do so 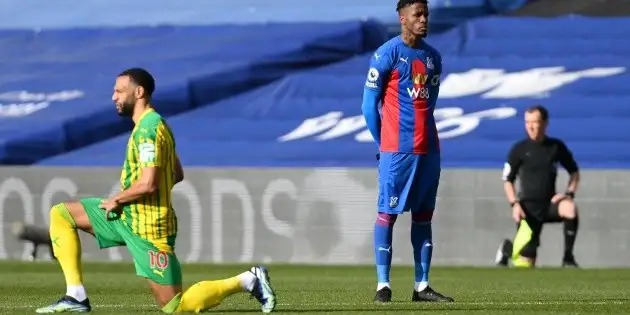 The Crystal Palace forward made a record by becoming the first Premier League player this season to stand instead of taking a knee as the protocol dictates.

The Palace forward had described the knee-taking gesture as “degrading” and told the football authorities to do more in the fight against racism. Instead of taking a knee, the forward lived by his word. He had promised before the match that he was going to “stand tall.”

While speaking to the Financial Times’ Busines of Football summit, Zaha explained why he felt the act of taking the knee is degrading.

Growing up my parents just let me know that I should be proud to be black no matter what and I feel like we should just stand tall.

“Trying to get the meaning behind it, it’s becoming something that we just do now and that’s not enough for me. I’m not going to take the knee.

He added that he would no longer wear the Black Lives Matter slogan shirt, saying ‘it feels like it’s a target’.

Zaha also promised not to wear the Black Lives Matter slogan shirt as it makes him feel like a target.

10 Signs You May Be Obese

Revealed: What Ruto, Raila need to be Declared The Winner by IEBC