By Jepkoech (self media writer) | 2 months ago 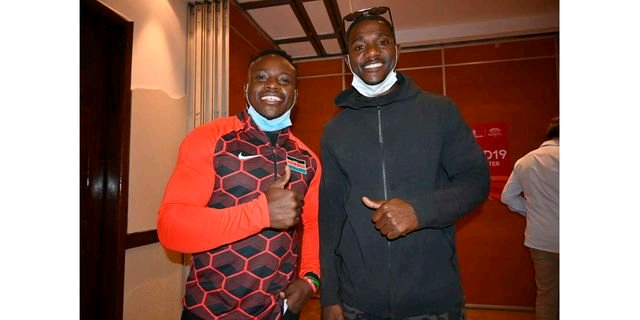 Ferdinand Omanyala (left) of Kenya poses for a photo with Justin Gatlin of USA (right) after the Kip Keino Classic pre-event press conference at Ole Sereni Hotel in Nairobi on September 17, 2021.

Omanyala, the first Kenyan sprinter to reach an Olympic semi-final at the Tokyo Summer Games and Diamond League, holds the national record time of 9.86 seconds

Omanyala got to race against Blake in the 100m semi-finals at the Tokyo Olympics where he clocked a National record time of 10.00 but settled third

Gatlin said he is proud of Omanyala, adding that the athlete was on the right path to glory

Kenya’s fastest man Ferdinand Omanyala and one of his sprints idols, two-time world 100m champion Justin Gatlin, Friday engaged in a “friendly fire” ahead of their 100m clash at the Absa Kip Keino Classic Saturday.

The two athletes met for the first time during the pre-event press conference at Ole Sereni.

“I am hoping to break a record tomorrow, and if all goes well l will beat this guy here, Gatlin,” said the history-making Omanyala with a telling laugh. “Meeting Gatlin is a big thing. I am happy and looking forward to a good race.”

“I respect Gatlin a lot since he has been an idol in this sport and I am now creating a path for myself to try and inherit his spikes...I just want to follow in the footsteps of the like of Gatlin, Yohan Blake and Usain Bolt,” said Omanyala, adding that it was matters sprints in their discussion when they met for the first time at the Ole Sereni Hotel.

“I will have realised my dream running against Blake and Gatlin. Bolt would have been next but he has since retired,” said Omanyala. “I am not putting myself under pressure since this is a sport I love.”

Omanyala said that having competed at Tokyo Olympics and Diamond League, he revealed that these stars don’t run on fuel and that they are simple human beings.

“Omanyala is a pioneer in Kenya, being the first 100m athlete at Diamond League and to reach the Olympic semi-finals. No one has come to that level,” said Gatlin, adding that it’s not about the pressure to push Omanyala to be the next great sprinter in the world but allow him to see what the world can offer.

“Omanyala should be allowed to grow and race comfortably against good competition from America and Jamaica. I have given him tips on the need to take rest in the season and come back stronger,” said Gatlin, who had in the morning had a great experience at the Nairobi National Park.

“I was able to see beautiful nature and animals I could think about but right now I am ready for training and competition. It’s gonna be a great show especially getting to know that I have many fans in Kenya,” said Gatlin, who would like to adopt a Kenyan cheetah after his first back in 2012 in Washington DC.