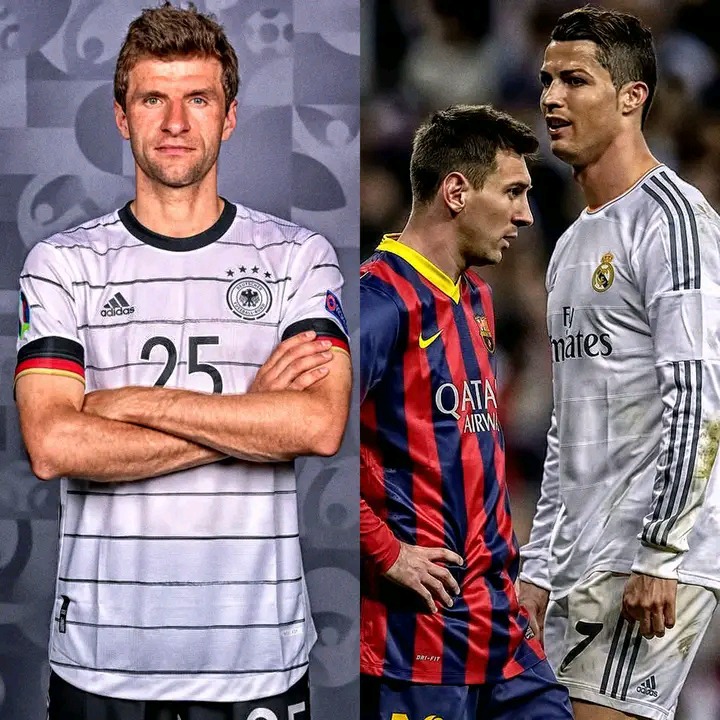 Bayern Munich creative midfielder Thomas Muller has surprisingly admitted that he has good stats against Lionel Messi that could make them compare, but not against Manchester United hitman Cristiano Ronaldo.

Muller's comments came during the time he was addressing or rather to trying to answer a question on who is the greatest footballer of all times between the two football figures.

Different players and pundits have always had different opinions concerning who is the greatest between the two players who have already the same stats and achievements difference in their ages not withstanding.

Apart from helping their respective clubs and countries to lift trophies, Ronaldo Messi have also won the Balloon d'Or which is the best individual accolade a player can win in his playing career. Messi has won the award 7 times against Ronaldo who has 5 Ballon d'Or.

However, despite having not won even a single Ballon d'Or, Thomas Muller who has also won all trophies in his career when asked the greatest between Ronaldo and Messi picks Cristiano Ronaldo, saying that he is having good stats against Messi's.

When asked by ESPN UK Muller said "I say Cristiano. I have good stats against Messi, but not really against Ronaldo."