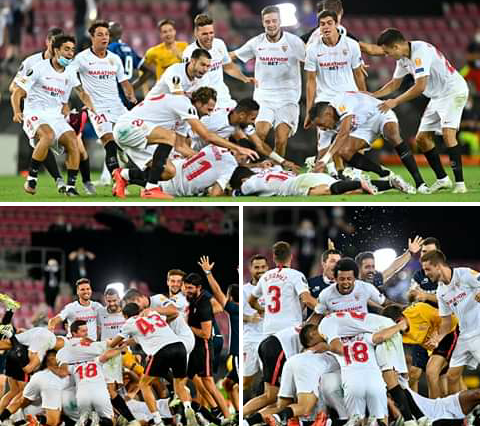 Congratulations Sevilla! Its now confirmed Sevilla are the new UEFA Europa league 2020 champions after Romelu Lukaku wrong clearance lead to an own goal gifting the Spanish side a record 6th Europa League trophy. Sevilla has won as twice as many Europa league titles as any other side in Europe. They had won the title in 2006, 2007, 2014, 2015, 2016 & 2020 breaking the existing Liverpool record of 3 titles. Inter Milan dominated the ball possession with 53% against 47% for Sevilla whom had 1corner against 2 corners for The Nerrazuri. The both had 5shots on target as Romelu Lukaku opened scoring in the 5th Minute by converting a penalty, Luuk De Jong Equalised for Sevilla in the 12th Minute before adding another goal in the 33rd minute which was cancelled out 3 minutes later by Diogo Godin forcing Halftime 2-2 draw. Lukaku Converted Diogo Carlos Vokey into his own net in the 74th Minute to hand in the trophy to the Spanish side for the 6th time, 4of them being won between 2014-2020. Other Clubs that have won the Europa League title this summer include: Porto(2011), Atletico Madrid Twice(2012, 2018), Chelsea Twice(2013, 2019), Manchester United (2017) & Sevilla 4times (2014, 2015, 2016 & 2020). This Title winning Meant everything for Sevilla Head Coach Julien Lopetegui as Inter Milan Manager Antonio Konte has to wait for another season to try and win his first title for Inter Milan since 2010! Next Seasons English Premier league Clubs such as Arsenal, Leceuster City & Tottenham Hotspur have an history to rewrite as Christian Eriksen becomes the first player ever to lose the Champions League and Europa League Final in a span of 2 seasons with Tottenham & Inter Milan respectively.