By BrainPookie (self meida writer) | 10 days 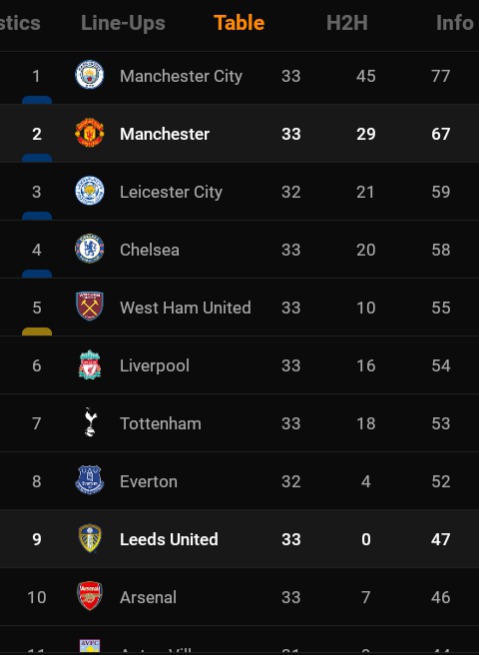 Manchester united were forced to share a draw with Leeds united. Manchester united has been shown some improved momentum after winning five games giving hopes to change table at the end of the season when Manchester City loosed to Leads united but today draw has left Manchester united fans hopeless of claiming a premier league in a history style that once happened in 2012/2013.

Manchester City the title contenders this season has only left with two more teams and if they beat them then they will be crowned the English cup for this year.

Manchester city are now currently playing with Tottenham for FA cup which they have already scored at 80 minutes. They are still in champion league also. Tottenham last week fired the 'special one' over consistent bad results Jose Mourhino.

The special one has suffered since he was fired at Manchester united in December 2018/ 2019 season.

Clubs across Europe and other major leagues are still monitoring the special one and Celtic has shown the interest of approaching him to be there next coach of the club. Jose Mourihno has said he is ready for the work and he still believes in himself and ready to work. Jose won major titles with different clubs Manchester united claimed Europa in 2017 with him, Real Madrid won major domestic and Champion league under Jose Mourihno, Chelease also won several cup under his coaching.

Manchester united there are still second in the league with 67 points now while Manchester City with 77 points, 10 points clear ahead of them. The only hopes for Manchester united silvare is Europa league which will meet with Roma at the semi finals.

Content created and supplied by: BrainPookie (via Opera News )