This past weekend has seen big teams in the English Premier League lose points and others gain points,as the race for the English Champion intensifies. Chelsea on Saturday retained their lead at the helm of the table, with a 1-0 win against a high spirited Brentford team. However, Chelsea had their goalkeeper to thank for the points as he made several saves to prevent Brentford from scoring.

Liverpool, who are second on the table had a convincing win away from home, after hammering Watford 5-0, thanks to goals from Sadio Mane, Mohammed Salah and a hat trick from Roberto Firmino. The win sent Liverpool to 18 points, one point behind Chelsea, whoa re on 19 points.

Third place is occupied by Manchester City who are having a total of 17 points, one point away from third placed Liverpool and 2 points behind league leaders, Chelsea. Brighton and Hove Albion complete the top four teams after 8 matches, with a total of 15 points having won two matches, drawn the last three and lost just once, in their best start to the English Premier League ever. 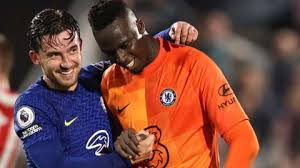 Tottenham occupy the fifth spot with 15 points ,two points above sixth placed Manchester United who had a nightmare evening at King Power Stadium on Saturday, where they were thrashed 4-2 by Leicester City.

The bottom three teams are Burnley, Newcastle United and Norwich who are 18tg, 19th and 20th with 3, 3, 2 points respectfully.