Ronaldo set to continue his fine form against Aston Villa at Old Trafford.

By CaptainNatasha. (self media writer) | 29 days ago 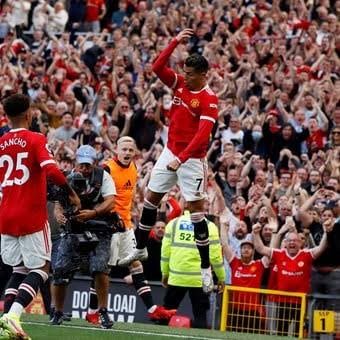 Christiano Ronaldo will play his second game at Old Trafford,and his fourth game for the club tommorow against Aston Villa.The five times Ballon d'or winner is set to continue his stellar performance,this is after scoring four goals in three matches for the red devil's since his second debut including two goals against Newcastle at Old Trafford.

The Portuguese has scored more goals against against Aston Villa than any other club in the premier league,he has netted eight goals in twelve appearances against Dean Smith's side.

Manchester United are expected to redeem themselves tomorrow.This is after a 0-1 defeat to West Ham at Old Trafford in EFL Carrabao cup on Wednesday night,that left many United fans criticizing Ole Gunnar Solskjær's tactics.

United are currently at third position behind Liverpool and Chelsea with equal points.Aston Villa are in fine form after beating Everyone 3-0 at Villa Park.They are currently at position ten,one point behind Brentford.

Why Tuchel's 2021/22 Chelsea are Becoming Favorites to Win the EPL Title.