By Suleimanjunior (self meida writer) | 15 days

Former featherweight and lightweight champion of the world Conor MacGregor has asked the UFC to create a new " MacGregor Belt " in time for his next contest against Dustin Poirier at UFC 264. 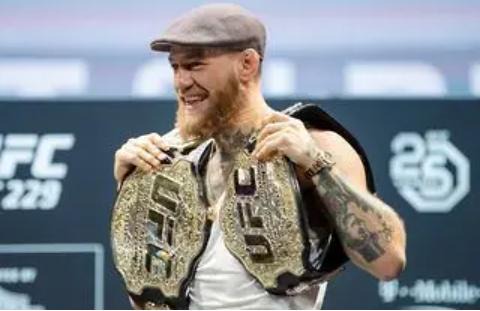 It doesn't matter what weight division or what belt is on the line because really I should create my own belt ."it doesn't matter if it's a featherweight ,water weight, lightweight.Its MacGregor Belt

The bout scheduled to take place at UFC264 in July 10th will be the third time Poirier and conor will be meeting .

Poirier upset MacGregor with some well placed calf kicks in the first round and then sweeped in the for the kill, knowing the static Irishman to the canvas and claiming a KO/KOT victory . Following a barrage of punches up against the cage.

Conor hasn't been shy to show off his progress in the gym for the july's clash has his new physque given away his opponent a plan?....

The thought is ,does it matter much to flaunt muscles for the match..? Because it is not a building contest or something

Some hype was made before the first flight took place about his amazing physical appearance .The question is can he shake oof his ring rust and get his will his fireback or track or is the really over his peak ..

Some fans asking themselves even us we should ask ourselves will the hype of body building give Dustin sleepless nights or the notorious is giving out thoughtless signs maybe Conor would just ask masvidal if he could borrow the belt for an evening instead...

The point here is will it be fair to introduce the Belt to the former champions ?

Content created and supplied by: Suleimanjunior (via Opera News )

Senator Mithika Linturi Drops a Bombshell to The Government Over This, Leaving Uhuru's Camp in Limbo

5 most Remarkable Individuals In The World

Curfew Roadblocks On Spot, As Experts Says It Could Spread Covid-19

Why Kalonzo Musyoka May Become The Next President of Kenya

Otile Brown Is A Furious Man, See What He Posted Regarding The Next Elections