Arsenal beat Everton 3-0 in the WSL thanks to McCabe

By Reignbaraka (self media writer) | 1 month ago 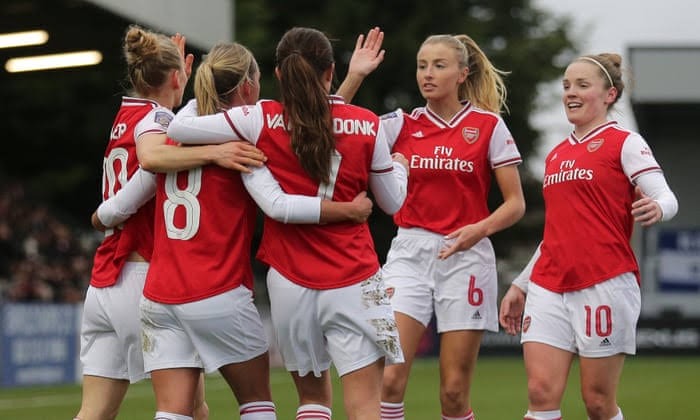 As a leader, Katie McCabe scored one goal and assisted on another. With a 3-0 win against Everton, Arsenal remained atop the Women's Super League table, while Tottenham Hotspur suffered their first defeat of the season, losing 2-1 to Brighton & Hove Albion.

In the 32nd minute, Ireland captain McCabe smashed a nasty dipping volley past goalie Alexandra MacIver, and nine minutes later, the left back picked out Lotte Wubben-Moy to score from a corner.

Everton presented little threat in attack, and Frida Maanum scored the best goal of the game late on for Arsenal, cutting inside and firing a right-foot rocket into the top corner in the 87th minute.

Spurs dropped to third in the table after conceding a goal in either half at Brighton and having forward Rachel Williams sent off for two yellow cards.

Arsenal leads the league with a perfect five-game record of 15 points. Chelsea are in second place with 12 points, one point ahead of Tottenham Hotspur on goal difference, and Manchester United are in fourth place with 10 points after a 2-2 draw with Manchester City on Saturday.

Content created and supplied by: Reignbaraka (via Opera News )