By MarNews (self meida writer) | 1 months

In an FKF Premier League encounter on Sunday, AFC Leopards required a late goal from second-half replacement Dan Sunguti to salvage a 2-2 draw against Nzoia Sugar. Ingwe, who have given up on the title race, took the lead in the fifth minute through Elvis Rupia, but the Sugar Millers equalized in the second half thanks to two quick goals from Masha Gaetan in the 57th minute and Hillary Simiyu in the 60th minute. 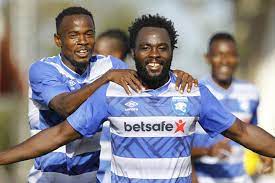 Due to injuries to important players, Ingwe coach Patrick Aussems made three changes to his starting lineup, with Ugandan goalkeeper Benjamin Ochan replacing John Oyemba, who was moved to the bench, and Said Tsuma being promoted to the starting lineup.

Defender Omar Somobwana, who joined the squad on a four-year contract from St. Peters High School in Mumias in January 2020, was given his first start.

In the 5th minute, Ingwe took a deserved lead, as midfielder Peter Thiong’o delivered the ball from a free-kick and lead striker Elvis Rupia rose highest to head it past Katasi.

The game remained evenly matched until the 57th minute, when Gaetan equalized for the Sugar Millers, and the 60th minute, when Simiyu converted a penalty after Okanda was fouled inside the box.

Sunguti leveled matters for Ingwe with a header after a cross from Rupia at the stroke of full time, with Nzoia on their way to their second win against AFC in the top-history. flight's