Between Lewandoski and Ng'olo Kante, Who Deserves to Win 2021 Ballon D'or? 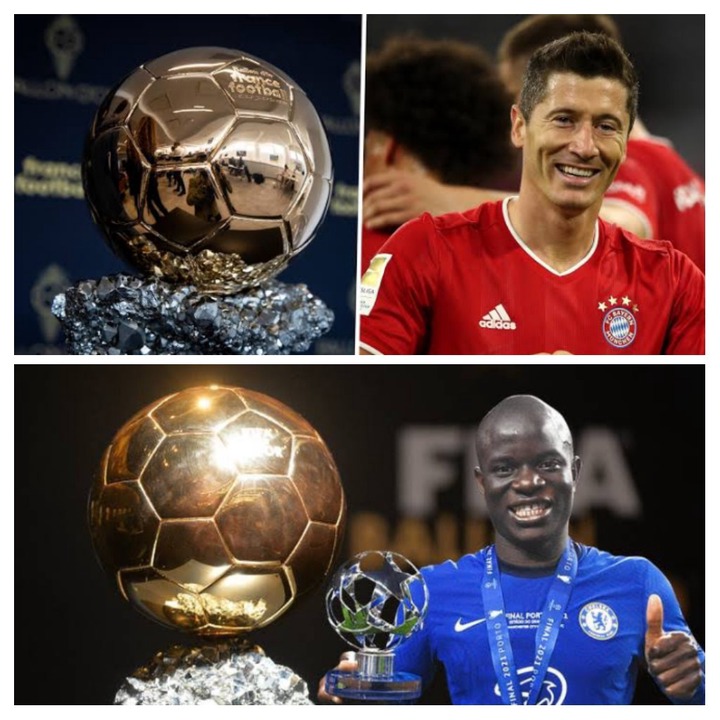 Ballon D'or is the most respected individual award in football history. Every great player always wish to win the award even once in their soccer history. The player who wins the Ballon D'or is arguably the best player in the world. There some of the world best players who have won these awards several times. Lionel Messi and Cristiano Ronaldo are the two players who have dominated this award. Lionel Messi has won the award 6 times while Cristiano Ronaldo has won it 5 times. Other players with more than one Ballon D'or include Johan Cruyff, Marco Van Basten, Mitchell Platini and Franz Beckenbauer. There are some of the greatest players who never touched the Ballon D'or award. The players include Frank Ribery, Neymar, Iniesta and Thierry Henry. Today we are going to look two possible win Ballon D'or winners this year.

Robert Lewandoski is arguably the best centre forward in the world. The Polish striker bagged up 41 goals and 7 assists in 28 Bundesliga matches in 2020/2021 season. He broke Bundesliga record of Gerd Muller who had a record of 40 goals. Lewandoski also managed to score 5 goals in 6 Champions League appearances. He has helped Bayern Munich to win consecutive Bundesliga titles and Champions League trophy in 2020. He is among the top contenders to win the Ballon D'or.

Ng'olo Kante also was superb for Chelsea in 2020/2021 season despite injuries. The French midfielder played a bigger role in helping Chelsea to win the Champions League title. Chelsea also managed to secure a Champions League spot. He was solid in the defensive midfield of Chelsea. He was named the man of the match in 3 consecutive Champions League matches. He was named the player of the match in the final and in both of the two semi final ties against Real Madrid. His name also should appear on the Balloon D'or list.

Between Lewandoski and Kante who do yo think deserves the Ballon D'or? Leave your comments in the comment box below.