By powerbetskenya (self media writer) | 1 year ago

At the age of 28 it is difficult to explain why Mario Gotze has never been sung as a great prospect or at least named among the best in Europe.

Gotze has recently completed a deal that sees him move from German side Borussia Dortmund to PSV Eindhoven in the Eredivise in Netherlands. The enterprising playmaker made the shocking move without a lot of media attention to say the least. 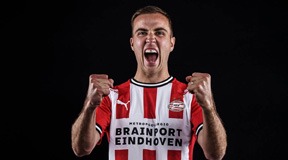 Mario is a World Cup winner with Germany, and he scored the goal that made them World Champions in 2014 FIFA World Cup against Argentina. He has won the Bundesliga title 5 times with both Bayern Munich (3) and Dortmund (2) and is a 4 times winner of the German Cup. Among his accolades are a Club World Cup winner with Bayern, a German Super Cup and a UEFA Super Cup.

All these achievements and yet he rarely makes the list for a Ballon d’Or or one of the greatest players or even a milestone list. Playing as an attacking midfielder he has played 381 games from his youthful days to present and has scored 105 goals and assisted 98 goals.

Get the best odds in Kenya here

His debut for the national team was in 2010 at the age of 18 years, 5 months and 14 days under the watchful eye of Joachim Löw. In total he has appeared 63 times in the national team and helped them win games with 17 goals to his name.

With such stats it is difficult for one to understand why he is not wanted by the bigger teams in Europe, not that PSV is not a great club. How many players at the age of 28 can name achievements such as the World Cup winner on their list?

Well PSV were the first to show interest and have secured Mario’s signature. What will become of the player is yet to be seen. Is he underrated? You can answer that question for yourself.

Be sure to keep tabs on Gotze and his progress by betting on the Eredivisie with Powerbets. Click here to bet.

Stats were recorded by Transfermarket.com

Content created and supplied by: powerbetskenya (via Opera News )