Europa Final: 1 Wrong Decision The Referee Made In The 5th Minute Of The Game 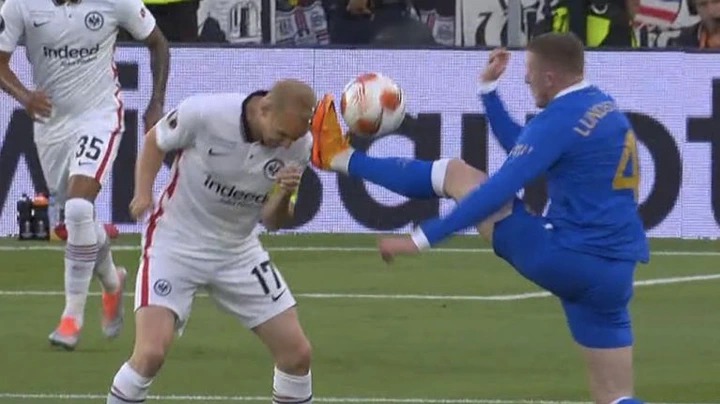 The first half of the UEL final was very tense because neither team was able to score. Keep in mind that Eintracht Frankfurt started out as the better team, especially on counterattacks, but Rangers FC got better before halftime.

The best parts of the first half, though, were Calvin Bassey's great performance, Eintracht Frankfurt's captain getting hurt, Aribo's play as a false 9, and the attacks from the German team. However, this article will focus on a mistake the referee made in the fifth minute of the game. Take a peek!

1. The match ref didn't give Rangers FC midfielder Lundstram a yellow card for a dangerous tackle on Roda.

Note that John Lundstram kicked Sebastian Roda with his high foot, and the German player was hit by the Rangers FC Midfielder's boot. Keep in mind that the game had to be stopped so Roda could get care. Note that Roda's shirt was also changed because it got dirty during the challenge. After that hit, Roda had to put a bandage on his hand.

But a second look at the tackle shows that it was risky and could have caused more damage, but the referee for some reason didn't give Lundstram a card. The Eintracht Frankfurt bench didn't like this because they thought the Rangers FC midfielder should have at least gotten a yellow card. So, it was a mistake on the part of the