By Tropicalcatalyst (self media writer) | 1 month ago

According to sources, Gabriel Jesus will miss the remainder of the World Cup due to a knee injury.

The Arsenal forward had to leave the field after Brazil's 1-0 loss to Cameroon in the final World Cup group match due to right knee discomfort. Media sources have learned that the 25-year-old has been sidelined for three to four weeks due to an injury that was discovered during scans.

According to those same sources, Jesus experienced pain during a few of Arsenal's games as they opened up a five-point lead at the top of the Premier League before the World Cup break. Jesus would miss the Gunners' first competitive game back against West Ham on Boxing Day at the Emirates Stadium if the reports are true. However, there is a chance that he will be able to travel back by January.

Whatever amount of time Jesus does wind up being absent, any absence will be a major setback for Arsenal. Since joining Mikel Arteta's team from Manchester City in January, the Brazilian striker has been a crucial part of the group, contributing five goals and six assists. 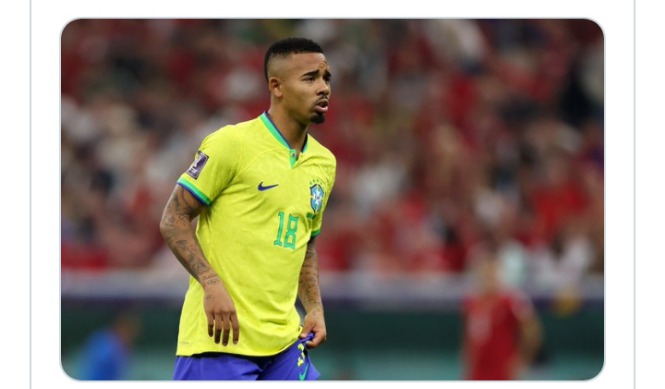 Content created and supplied by: Tropicalcatalyst (via Opera News )