By Bufdyb (self media writer) | 1 year ago

Welcome to our today Carabao cup games predictions that might return you good amount of money. The predictions are generally based on thorouh research in regards to statistics,standings and game recent forms. The information herein is supposed to give you pror information and to guide you to make informed decisions rather than placing bets in darkness.

Look at some of the predictions we selected and analysed specifically for you below. 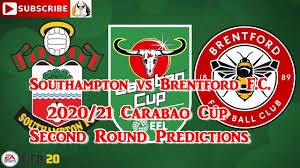 The match will kick off at St Mary's Stadium today.

Southampton has won two , drawn three and lost one in their previous six matches. On the other hand Brenford has lost four and won only two.

Brentford lost 1-0 to Birmingham at weekend and this was brought by lack of their key forward players as Dale is missing who is currently at Aston Villa.

Brenford has low confidence in this match and they are likely going to lose. We predict Southampton to win with 2 goals to nill.

Everton will clash with Salford City at Godison park tonight.

Everton has won two ,lost two and drawn 2 on their previous six matches whereas Salford has won three, lost two and drawn only one match. Everton are eager to beat Salford and proceed on to the next level. Everton gained confidence when they beat Tottenham Hotspur at their starting premier league match.

Everton also lost only one match of their 11 matches they played at Godison Park. We predict Everton to come to victory here at home.

Leeds will take on Hull on their home ground at Elland Road tonight.

Leeds has won five and lost only one match on their previous six matches and on the other hand, Hull has won two and lost four matches. Leeds showed that they have motivated players when they played a very competitive match with Liverpool which they lost with only one goal difference. Leeds has an average of over two goals on their last five matches.

Leeds beat Hull two times last season in their championship meetings. We predict the match to end with a home win and goals over 2.5 at full time.

Content created and supplied by: Bufdyb (via Opera News )