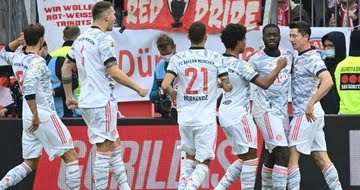 Bayern Munich bounced back in style against fellow title contenders Leverkusen after suffering a shock setback to Eintracht Frankfurt two weeks ago and lost top spot to Borussia Dortmund overnight.

Before the weekend, the two clubs were level on points in first and second place, but Bayern Munich put their hosts to the sword with a violent and spectacular first-half performance.

In the first half, the 31-time German champions scored four goals in seven minutes to humiliate a young Leverkusen side and go a point clear of Borussia Dortmund at the top of the league.

Bayern seized the lead as Lewandowski converted a Dayot Upamecano cross with a superb backheel to score his ninth goal of the season.

Soon after, Leroy Sane hit the post as Leverkusen fought to contain a ferocious Bayern attack. The visitors sliced through their opponents on the counter-attack on the half-hour mark, with Alphonso Davies bursting into the area to set up a poacher's finish from Lewandowski.

With a fast deflection of a Niklas Suele shot past a hapless Lukas Hradecky, Thomas Mueller made it 3-0.

Any chance of a Leverkusen comeback was quickly dashed as Mueller set up Gnabry with a low cross to make it 4-0.Gnabry threw in a fifth.

In the second half, Leverkusen recovered, with Kerem Demirbay forcing Manuel Neuer into a save before Patrik Schick equalized.

Omar Richards, an English defender who joined Bayern from Reading earlier this year, came on as a second-half substitute, and Lucas Hernandez began the game despite being scheduled to appear in court in Spain on Tuesday.

Hernandez, a French international, could face up to six months in prison for violating a restraining order issued in 2017 after an altercation with his then-girlfriend, whom he has since married.