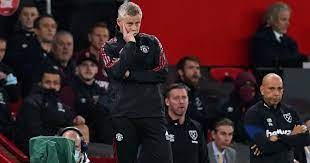 Twenty second of September was a sad night for Manchester United fans and club as they exit the Carabao tournament. Manchester United lost to West Ham United at their home ground Old Trafford. West Ham took an early lead during the beginning of the match where they scored their winning goal within the first ten minutes.

Manchester United escaped a draw the last weekend with West Ham United in the English Premier League where David Degea saved a penalty that was to draw the two teams in the ninety fourth minute therefore saving Manchester United two points.

West Ham has therefore shown a great threat to the big team especially this September 2021 month and they seem they can do all it takes to ensure they keep their record. in response to the Carabao results; Couch Ole Gunnar says that they did not expect for such a result even though the Carabao isn't a big tournament. he added that he has ensured that his stars for the upcoming match against Aston Villa started the West Ham game for their fitness before their game.

Aston Villa is not a small team anymore and thus it requires total preparation. Aston Villa battled with Chelsea on this same night for the Carabao qualifications but lost to Chelsea in the penalty level after drawing with Chelsea during the standard game time.

Manchester United may do all it takes to ensure that they retain the first position in the English Premier League the whole of this season.