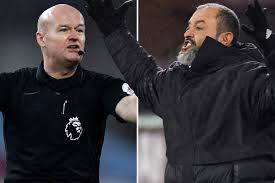 The Portuguese tactician criticized referee Lee Mason for what he termed as poor officiating. Photo:(Source/Courtesy).

Ashley Barnes and Chris Wood scored each goal a piece to help their side out of the premier league relegation zone with a 2-1 win over Wolverhampton Wanderers.

Albeit the highlight of the night was Wolverhampton manager Nuno Espirito Santo who could be in the hot soup for slamming referee Lee Mason their loss on Monday.

Thd angry Nuno said that Lee Mason had no to officiate a top-flight league match since his decision was wanting and he lacked the authority to control the game according to the Mail.

"This is a problem that we knew;we had Lee Mason before. It is not about the crucial mistakes or decisions, it is about the way he handles the game. The players get nervous, too much voices, he whistles by the voices when some players are shouting," he lamented. 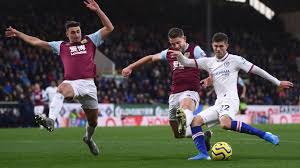 In addition, Nuno told Mason after the game that he doesn't want to see him a gain. A thing that could see the Portuguese face sanctions from the FA. For saying that the referee was not fit to officiate English top flight league.

"I just don’t want to see him more. That’s what I told him. I hope he doesn’t whistle a game of ours again because all the games we have with Lee Mason are always the same," Nuno said.

"He cannot control the players, the players are constantly arguing; both teams. With all the other referees, the game flows. There’s dialogue. He’s just not ready to do it," he added. 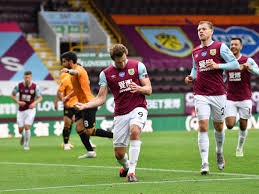 Burnley went on to win the match despite Nuno rant against poor officiating. Photo:(Source/Courtesy).

The victory saw Burnley go four matches without losing and move out of the relegation ahead of Fulham.

The Only Players Who Fought For The Badge: Chelsea Fans Praise Stars Who Were Good Against Brighton