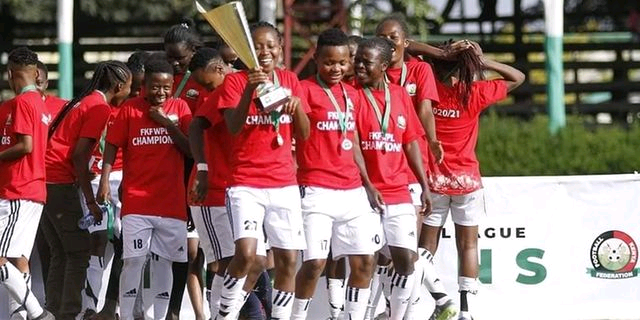 Argentinian Lionel Messi and American Alex Morgan. Outside football it’s Carol Radull. Doreen Nabwire’s journey is also inspirational to me. She was the first Kenyan woman to play professional football in Europe. My dream is to play in Europe.

From her days at Nginda Girls, where she helped the team win the national secondary schools' football title, the ever-smiling assassin has her eyes set on a move to Europe.

She talked to Nation Sport about her love for football, prize money given to the women's league winners, future plans and President Samia Suluhu’s remark on women footballers.

How did you get into football?

I developed interest when I was seven years old. I could join the boys in my village whenever they played. I was the only one from my primary school who was selected to represent the school at the national ball games.

Later on, I joined Nginda Girls where I became the captain of the football team. My coach Harrison Clinton gave me the captain duties because he was impressed by my discipline and leadership skills. I also played handball while in high school, but when I fell in love with football completely, handball became a pastime.

It was a great, especially having scored the first goal in the final and assisted another one. Winning the league was our biggest objective from the onset and I’m glad I helped the team to achieve it. (Thika Queens defeated Gaspo Women 3-0 in the final to bag the title).

What's your take on the prize money awarded to KWPL winners?

My view is the money can be more if the league and clubs are able to secure a sponsor(s). At the moment, I’d love to see the league attract more interest, especially from local fans.

We need them to attend our matches, so that sponsors can see value for money and come on board. Last season, we were privileged to have some of our matches live-streamed by the Football Kenya Federation. We hope we’ll see more of that this coming season.

How are you investing in your future?

The money we get on this side of the game at the moment goes straight into paying bills. I am working on building my brand and also working and praying for a move into better leagues, so that I could have enough to spend and invest.

What would you be doing if you weren't a footballer?

I would do art, especially drawing. It’s one of the things I love doing, but haven’t really taken seriously recently. I am also working hard on building my brand both online and offline. I could venture into advertising.

Is football your full-time job?

At the moment, yes. I try to make do with the little I get, as I focus on getting into established leagues in the future.

What are your thoughts on the recent comments by President Suluhu on women players?

I may not understand her context, but I believe beauty is much more than that.

What are you chances of making it to the 2023 World Cup?

I believe the team that will be selected will be good enough to secure a slot in the next round, considering the level of competitiveness of our just concluded league, and, of course, with proper preparations. We have a very good crop of players currently.

What's your greatest moment on the pitch?

For Thika Queens, it’s definitely when we won the league last season. For the national team, it’s scoring the only goal against Ghana U20 team with the Junior Harambee Starlets in 2018 African U20 Women's World Cup qualifying tournament.

Who's your role model in football and outside football?