Another victory for the Gunners

By Chebbywebby (self media writer) | 2 years ago

The Gunners did it again. They won the FA cup semi-finals after playing against Manchester City which ended 2-0, both goals scored by Aubameyang Pierre at 19 and 71 minutes.

Luiz who was man of the match has taken a fair share of criticism and he is so deserving to be highlighted. Not only did he win a hundred percent of his aerial duels but also made eleven clearances as City peppered his box but were met by a tremendous performance. His influence was astonishing and with Tierney alongside him matching his defensive brilliance and the inconsistent Mustafi up his game. He is one of the finest defenders and he truly deserved the man of the match award that he was given. His performance against Pep Guardiolas team showed what he can do best. And if Luiz, Tierney and Mustafi can perform like that in every match Arsenal play, then Arsenal will always have a chance. Aubameyangs two goals made Arsenal proceed to the FA Cup finals which the final match will be played on 1st August and will play against either Chelsea or Manchester United whose match is today on. Their win against Liverpool really boosted their confidence towards yesterdays match. Arsenals last victory in this fixture was the semi-finals in 2017, suffering seven straight defeats against Manchester City but their win against Liverpool boosted their confidence that they will win against Peps team. In most of the games played by City, they don’t always allow chances but Aubameyang scored the first goal after a cross from Nicolas Pepe which caught Kyle Walker off-guard. With only twenty minutes remaining, Aubameyang played onside by Merdy then went for Tierneys ball over the top which made Arsenal proceed to the finals which will be played on August 1st. 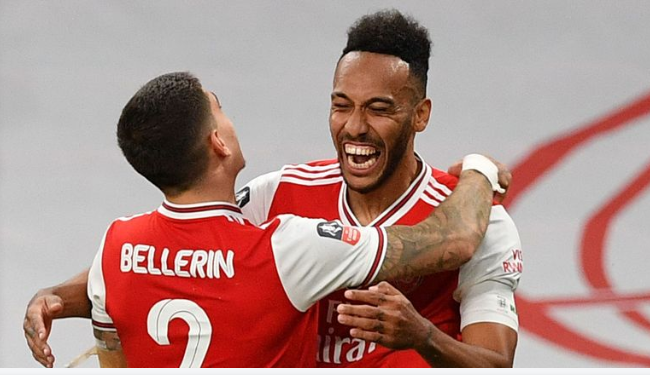 Content created and supplied by: Chebbywebby (via Opera News )