By TAFITINEWS (self media writer) | 2 months ago 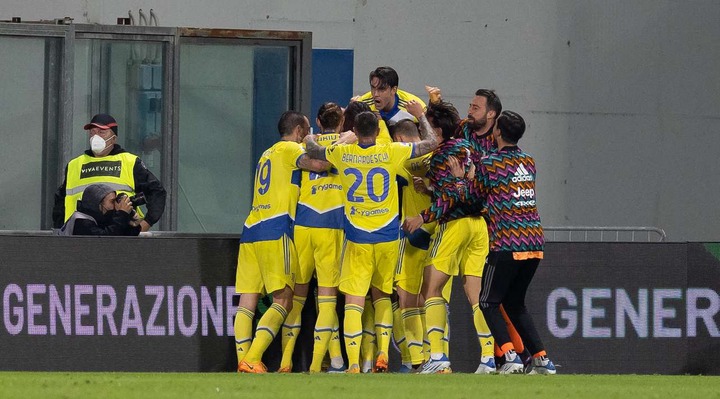 Sassuolo initially failed to utilise their usual high-energy pressing setup, but they grew into the game as the half went on, dominating play and peppering Wojciech Szczęsny’s goal. The stopper’s resolve was finally broken five minutes from HT, when Domenico Berardi superbly split the Juventus defence with a neat flick, which played in Giacomo Raspadori through on goal to smash an effort in via the near post, leaving the goalkeeper disappointed in himself.

Having looked much the better side, Sassuolo were incensed just before HT as Paulo Dybala equalised with a thumping drive of his own, smashing his effort into the top corner, but despite the hosts’ anger at the referee not giving a foul in the build-up, the goal stood.

Whatever Juventus boss Massimiliano Allegri said to his players at HT worked almost immediately, as Álvaro Morata came agonisingly close to equalising with a headed effort, but was denied by a stunning point-blank save from Andrea Consigli. Despite the early pressure in the second half from the visitors, Alessio Dionisi’s side managed to stand firm in defence.

As the half drew on, neither side looked like managing to find a second goal, until substitute Moise Kean broke Sassuolo hearts and netted in the 89th minute, though Consigli was left frustrated as the ball squirmed through his legs. Sassuolo still remain on course for a third consecutive top-half finish, whilst Juventus capitalised on Napoli dropping points in third place. They are now just one point behind them, and unbeaten in 11 Serie A away games.

Ministry Of Education Warns Schools Against Conducting Tuitions During Holiday For Learners.

Moi University To Lay Off Some Staff Amid Financial Constraints

JUST IN: Term 2 Opening Date For All Primary and Secondary Schools Finally Unveiled

We Can't Continue To Lose Innocent Lives On The Express Way. Akothee Says As She Offers A Solution