By Arsenal-sports (self media writer) | 6 months ago Arsenal fans will be smiling hearing this news from Italy. Arsenal could be few hours away from announcing the first signing with the club determined to finish among the top four. The gunners are convinced that Fiorentina star Dusan Vlanovic will be wearing their shirt as from next week. Mikel Arteta want to bring in a freshman who can lead the forward line after Aubameyang's uncertain future is resolved.

Reports from Italy indicate that Fiorentina are now pushing hard for the deal to be completed and want a swap deal to happen. This seems to be good for Arsenal who have been seeing £50m as more money. The serie A club has contacted Arsenal and want the deal to be sealed before next week.

The Italian outfit already have a clause inserted in his loan deal that gives them an option to sign him for £12.5 million. That can be triggered at the end of this season, but Fiorentina want to sign Torreira as a part of the deal that would see Vlahovic move to Arsenal, just so that they won’t have to pay for the midfielder out of their own funds in the summer.

Arsenal technical director Edu has already hinted on announcement and medical as he knows it's 95% agreed. The north London club want to bolster the forward line and the midfield departments. Vlahovic has been one of the exciting players to watch in Serie A. His agent is the one holding the deal with his high demand for commission. 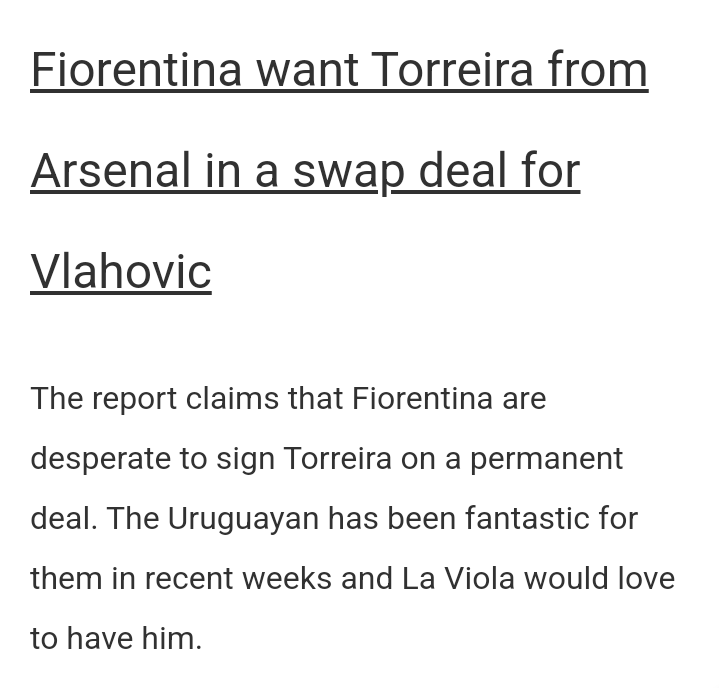