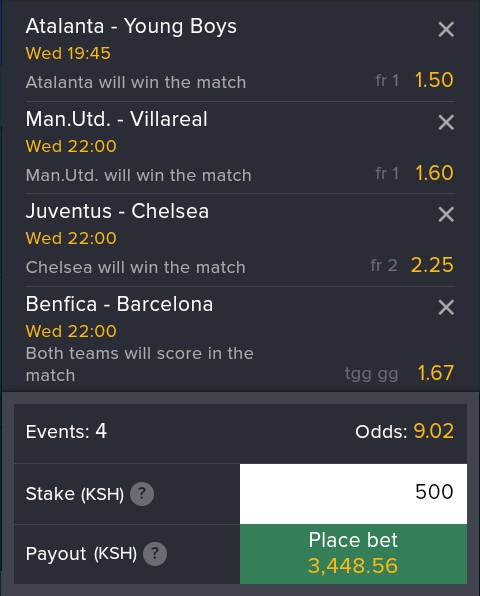 Cristiano Ronaldo has scored 4 times in the last 4 matches for Manchester United.

CR7 has scored 6 times in its last 5 matches under the shirts of MU and the Portuguese selection.

The Portuguese international, silent against Aston Villa, will want to find the net.

MU will be keen to win Villareal after his first misstep in Switzerland against the Young Boys of Bern.

Chelsea are very efficient away: 2 wins and 1 draw with big teams.

Juventus has a disappointing record at home: 1 win, 1 draw, 1 loss.

The Blues have only lost once against the Turinese in 4 duels.

Juve are 9th in Serie A.

Chelsea are 3rd in the Premier League after their first loss on record this weekend.

Benfica Lisbon started with a draw in C1 at Dynamo Kiev (0-0).

Benfica Lisbon will certainly be content with one point when they receive Barça.

FC Barcelona experienced a heavy defeat at home against Bayern Munich for their entry into the competition in C1 (3-0).

FC Barcelona have won only three of their first six La Liga matches.

Atalanta Bergamo must win to get into the best possible conditions in the race for the round of 16.

Atalanta Bergamo has not lost for four meetings and remains on a draw on the lawn of Inter Milan (2-2).

The Young Boys of Bern beat Manchester United on Matchday 1 (2-1), playing for almost an hour on the power play.

The Young Boys of Bern seem to be the most affordable team of this group.