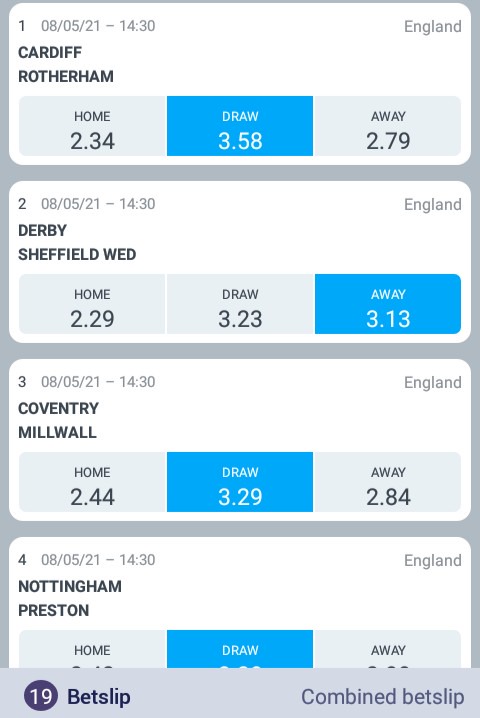 Lyngby BK will be hoping to bounce back here following the 4-0 Superliga defeat last time out to Aalborg BK.

It’s been a rare occasion in recent games that Lyngby BK haven’t conceded. The reality is that De kongeblå have been scored against in 5 of their previous 6 clashes, leaking 10 goals along the way. That sort of pattern isn’t assured to be carried forward into this match, however.

A look at their previous results shows us that Lyngby BK:

have not been beaten in the league by AC Horsens in their last 4 matches.

have not won at home in their last 4 matches in the league. Fans are getting restless.

Illustrating their penchant for productive encounters, goals have been scored 21 times in the previous 6 matches in which AC Horsens have taken to the field, yielding an average of 3.5 goals for each fixture. Opposing teams have got 12 of these goals.

Coming into this contest, AC Horsens have not won against Lyngby BK in games played away from home for the previous 3 matches in the league.

A glance at their most recent head-to-head meetings dating back to 18/03/2018 tells us that Lyngby BK have won 3 of these games & AC Horsens 1, with the number of drawn matches being 2.

A combined total of 17 goals were shared by the two clubs throughout the course of those matches, with 10 from De kongeblå and 7 being from Den Gule Fare. That’s an average goals per game of 2.83.

The last league clash featuring these clubs was Superliga match day 3 on 18/04/2021 when it finished AC Horsens 1-3 Lyngby BK.

On that occasion, AC Horsens had 47% possession and 8 shots on goal with 2 on target. The scorer was Louka Prip (92').

The match was refereed by Jakob Kehlet.

Thanks to a largely available group, there is just the lone fitness worry for the AC Horsens boss Jens Askou to be concerned about. Jannik Pohl (Heel Bone Injury) won’t be playing here.

We envisage that Lyngby BK have it within them to be able to create a high number of chances and successful shots on target.

In contrast, AC Horsens will not find it easy to score but we do think that it’s more than likely that they will be converting at least once as well.

Our tip is for a pretty comfortable 3-1 win for Lyngby BK at full-time.

What are the best odds for this match?

Checking on the latest odds for this match on the WDW market, the win for Lyngby BK is available for 1.81, a bet on the game finishing all-square is 3.82 and taking a punt on a victory for AC Horsens will get you 4.08. They are the top prices available at present.

Opinion: Tribes With Huge Population That Might Propel DP Ruto To State House in 2022

Exclusive : All But Confirmed As Manchester United "Confident And Optimistic" In Sealing The Deal