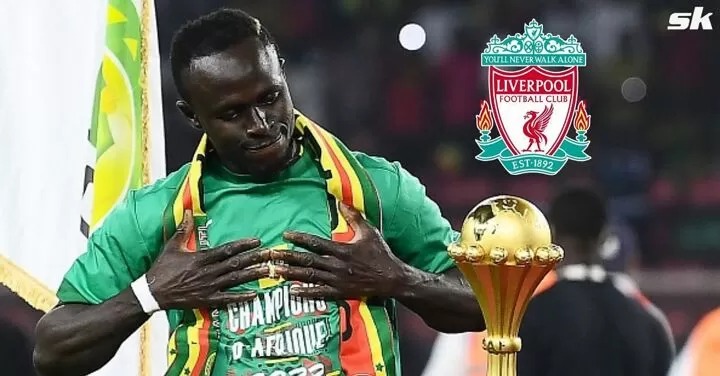 News of Liverpool legend Sadio Mane has surfaced alluding that the former epl star wanted to sign a contract with his national team incase he died during the Africa cup of nation.

It can be remembered that the now Bayern Munich star suffered a nasty concussion on the pitch when Senegal played against cape Vade earlier on this year. With a few minutea back into the game Mane was substituted.

His availability for the next round of quarter finals was thrown into doubt with everyone having concern about his well being. Eventually he was given clearence by the team doctor and he was ready for the next game.

In his argument with the doctors Mane insisted that the suggestion of being rested cannot apply.

"I know I shouldn't play but lets have a contract it will be my responsibility, i will sign. If I die they have to say it was my own fault. But they said; "Sadio you cannot play," but I said; "no, no its out of the question."

With everyone being reluctant to allow him back in action and Liverpool having written to the federation asking that he be given sufficient rest until he was out of danger, Mane turned to his coach and said, "coach I know you are worried but just write a paper and I will sign."

In his narration Mane indicates that the mood in the medical room was tensed as everyone was worried. But as the discussion continued the team doctor suggested that at leats a scan was to be done first before any conclusions were made and Mane agreed.

"In the morning after the head scan was conducted there was nothing alarming so we send it to Caf and everything else was okay," said Mane.

Luckily, Mane was allowed back on the field and went on to win the tournament with Senegal.