As things stands, Manchester United have yet signed a single player almost three weeks since the window was opened but they are reportedly need to sign several players this summer.

There desperation comes after showing interests of to strengthening their current squad in number of positions in the field and according to reports from Old Trafford, the 13th times Premier league Champions are targeting a number of centre backs ,a right backs , central midfielders and a back up striker

At the Central defence, man utd are linked with Ajax Jurrien Timber together with fellow Eredivisie defender, Netherlands and Feyenoord left back Tyrell Malaciaa and according to reports, the deal is finalised just waiting for announcement .

Central midfield area, the priority target is Barcelona midfielder, Frenkie de Jong . The 25-year-old Holland international midfielder is keen to reunite with his Old boss at Old Trafford and Ten Hag sees the midfielder as the genesis of rebuild process at the theatre of Dreams

With free agent the Danish international Christian Eriksen who is also on the cards ,is considered a prime target this summer to strengthen their attacking midfield role

Ajax striker Antony is also among the suitors needed at Old Trafford this summer and is said to be pushing for the move to Old Trafford.

The Red Devils are said to in the transfer market in the hunt for new center back and as it was reported earlier Eredivisie duo Jurrien Timber and Tyrell Malacia are considered suitable for the club.

The red devils are said to have reached an agreement with Barcelona midfielder Frenkie Jong .

Ten Hag can use 4-2-3-1 formation, with Frenkie and Eriksen at its base as double holders , and Bruno Fernandes as No.10 ahead of them

In the front line, Cristiano Ronaldo will lead the attack and assisted by Jadon Sancho and expected new signing , Antony 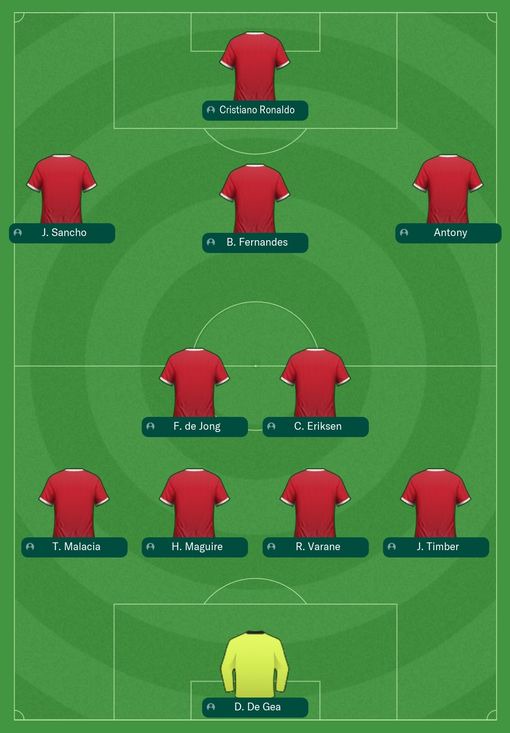