By Jepkoech (self meida writer) | 26 days 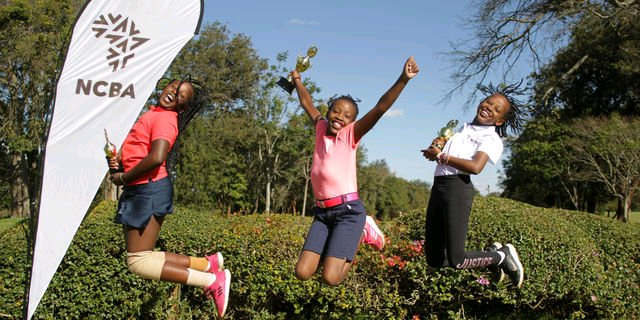 A select number of young golfers from Tuesday's event will get a chance to play at the Rome Classic, which is taking place this October, and at the Big 5 tournament in South Africa next year once scores have been officially ratified.

The second of the two Junior events in the NCBA series will take place at Muthaiga Golf Club in December.

The 39 formed the top-three finishers across 13 player categories for the event, which had been organised according to the junior golfers’ ages.

Over 85 junior golfers took part in the tournament that had been jointly organised by NCBA Group and the United States Kids Golf Association, as part of the ongoing NCBA Golf Series which has now been played across 12 legs.

Some of the juniors after receiving awards during the NCBA Golf Series junior invitational tournament at the par 72 Karen Country Club course on August 24, 2021.

In the seven years-and-under category for girls, Ashley Gachora emerged the winner with a total of 88 points – having carded rounds of 45 and 43 points across the two-day event. Aarna Mengi and Irene Asiyo completed the podium places in second and third place with 99 and 133 points respectively.

In the eight-to-nine year category, Kanana Muthoni was crowned the winner with a total of 74 points. She finished ahead of Brianna Ngecu and Wamaitha Waithaka, who finished second and third with 91 and 107 points respectively.

In the 10-to-eleven years category, Aloe Cherono was the winner with a total of 176 points from the two days of golf, ahead of Nkini Pasha and Sophia Nesbitt, who finished with 202 and 216 points to finish second and third respectively.

Agamjot Kaur claimed the top spot in the 12-14 years’ category with 173 points, ahead of Bianca Ngencu and Aaliyah Murray, who posted 174 and 178 points to claim second and third place.

In the boys’ categories, Javier Maroko emerged the winner in the six years and under category with 84 points, having carded rounds of 43 and 41 points.

Kanana Muthomi follows the progress of her tee shot from 10th tee during the NCBA Golf Series junior invitational tournament at the par 72 Karen Country Club course on August 24, 2021.

He finished ahead of Zayn Bhatti and Aaran Das Gupta, who carded rounds of 107 and 110 respectively to complete the podium places.

In the 10-years category, Mwathi Gicheru claimed the top spot with 160 points as Shashwat Hanish claimed victory in the 11-year-olds’ category with 151 points.

Meanwhile, 12-year-old Nathan Mwangi, winner of the Karen leg of the NCBA Golf Series in July, won in the 12-year-olds category with 171 points. In the 13-to-14-year-olds’ category, Ishan Samani was crowned the winner with 157 points as Krish Beiju took the top spot in the 15-to-18-year-olds’ category.

“Increasingly, we see the junior golf series as an opportunity for us to invest, not only in the current game of golf, but also in the future game of golf as part brand pro is to inspire greatness. The opportunity for these junior golfers to play at either Rome or South Africa after excelling at this event proves to the juniors that regardless of where they are from, if they have talent and continue to invest in the skill, they can play on the world stage.”

Speaking at the same function, US Kids Golf Foundation Director for Africa, Nicholas Geerts, said he was encouraged by the showcase of talent at the two-day event, noting that there is promise in the future of the sport in the country.

“I am extremely impressed by the golf I have seen here today over the last two days. The level of golf has really improved among the junior players and goes to confirm that there’s progress in the development of the sport in the country.”