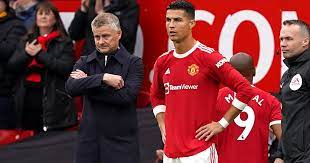 Manchester united fans a becoming frustrated day in day out after the team performing poorly in matches they are supposed to win. Most fans were delighted after the signing of Jadon Sancho, Raphael Varane and Cristiano Ronaldo.

It was believed that the signings would improve on defense and attacking side of the team. Cristiano Ronaldo is already on the score sheet six times after 4 matches this season.

Fans are blaming the coach for the team performing poorly since they believe that he is unable to make important decisions for the team to do better.

Manchester United ended up with a draw when they played Everton last weekend. Cristiano Ronaldo,Paul Pogba and Jadon Sancho were all left on the bench something that didn't go well with the fans.

In the coming fixtures this month it will be tough for united since they will be playing Liverpool Manchester city, Totenham and also playing Young Boys who defeated them in the first leg. they will also play Atalanta in a home and away match.

It is highly possible that if the team won't perform well the manager is likely to be sacked. what is you take on this, do you think Manchester will make it?