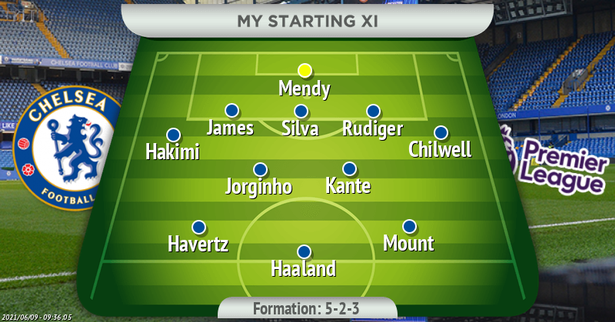 Chelsea probable line up with the new summer targets in the upcoming 2021/22 Premier League season.

The Blues are reportedly working on completing some new players into Thomas Tuchel squad ahead of the new season. Tuchel needs a few additions to bolster his squad to make them to be strong title contenders according to their objectives.

According to Football London, Chelsea are strongly linked with Borussia Dortmund striker Erling Haaland who is expected to solve their goals scoring crisis. The report further reveals that the Blues have already arrived at personal terms agreement with Haaland meaning the deal is getting more closer.

The Blues are also linked with Inter Milan right back Achraf Hakimi and the deal for the defender is reportedly getting closer too, after the Blues submitted another improved offer of about £68.5 million after Milan rejected their first transfer offer.

If the Blues completes the two main target transfer deals, Tuchel will be forced to make a few changes in his lineup starting from the opening match against Crystal Palace. Achraf Hakimi will be used as the alternative for aging Captain Cesar Azzipliqueta, while Erling Haaland will be used as an alternative for Timo Werner in the forward line.

Covid-19 Update: Bad News as 16 Patients Succumbed From the Disease as County of Nairobi Leads

Covid Update: The Ministry of Health Delivers Good News as Positivity Rate Drops From 13.9% to 12.2%

KDF Ranks; From The Top To The Lowest Together With The Salary Of Each Rank