By Predictions (self media writer) | 15 days ago 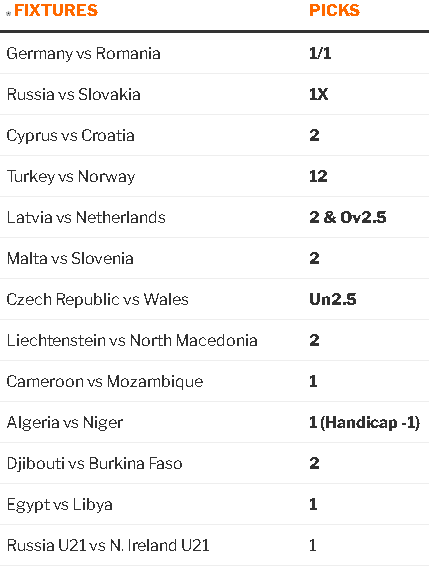 Group J World Cup qualification gets underway tonight as Germany goes head-to-head with Romania. The hosts have attained expectations of Group J, managing to secure 5 straight wins from 6 matches that have already been played. As a result, the German national team is already being considered to effortlessly be cruising for the 2022 World Cup. The hosts have been tight at the back and have managed to achieve five clean sheets from six games.

On the other hand, Romania has only managed to attain 2 wins from the five matches that they have already played. Despite having a poor start, they have managed to remain unbeaten in their last three successive matches. Nonetheless, we don't expect the visitors to have any chance of winning against a German side that is full of stardoms.

Daugavas stadium will today host a match pitting Latvia against the Netherlands. The Netherlands currently occupies the 1st spot in Group G. After playing 6 matches, they have suffered 1 defeat, 1 draw and have managed 4 wins. This fixture is a clash between one of the best teams in Europe and a little team.

In the meantime, Latvia is ranked 2nd from the bottom of the table. The hosts have not been performing well since 2016 and as such have just managed to secure 7 wins from a possible 50 games that they have played to date. With such statistics, we expect a motivated Netherlands side to attain all 3 points, making them extend their lead at the table.

Today's Group H World Cup qualification game between Cyprus and Croatia will take place at the A.E.K Arena. As things stand, the hosts are ranked at the bottom of the table, only managing 4 points after playing 6 games. They will come into this fixture after suffering a 2:0 defeat against Slovakia.

Meanwhile, Croatia is ranked 1st on the table having attained 13 points from 6 matches played so far. They have the same points as Russia and will come into this match hoping to secure all 3 points that will make them extend their lead in Group H.