By TheMassiveResearch (self media writer) | 1 year ago

In the Karaiskakis Stadium in Greece, Arsenal Football Club saw an enormous victory of three goals to two against Benfica for the UEFA Europa League. Arsenal was the first to hit the net when Bukayo Saka gave Arsenal captain Pierre Emerick Aubameyang a pass that saw him score a successful goal.

In a sudden twist of fate when Arsenal's Danni Ceballos tripled an opponent player and a foul was taken, Diogo Congalves shot a successful foul that went for the ninety degrees bar against Arsenal goalkeeper Bernd Leno.

In the 60th minute, Rafa Silva of Benfica was able to pass through the defense of Arsenal and the goalkeeper to manage to score their second goal.

A few minutes later, however, Tierney of Arsenal made a powerful shot that scored Arsenal's second goal during the match.

In the final score that saw Arsenal win against Benfica, Bukayo Saka once again landed a pass of Aubameyang's head that saw the back of the net bringing victory to Arsenal. 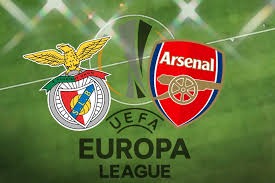